Bitcoin broke through the previous pressure level of $61,781 yesterday and continued to set new highs, hitting a record high of $63,860. The bulls are actively looking for support to stabilize at the $63K level.

At the same time, after the US stock market closed on Tuesday, April 13, EST, the Nasdaq exchange announced that Coinbase will be listed on the exchange directly on Wednesday, EST. The stock code is COIN and the reference price is $250. According to the calculation of circulation, the market value of Coinbase will reach $65.3 billion.

In the past, technology giants such as Spotify, Slack, Palantir, Asana, and Roblox who chose to launch via direct public offerings (DPOs) on the US stock market had outstanding performances on the first day of trading. The average first-day opening price for newly-listed companies is 37% higher than the reference price. Based on this calculation, Coinbase’s opening price today will exceed $342.5 per share, and its market value will be close to $90 billion.

With the growth of mainstream interest in cryptocurrencies and the total market value of cryptocurrencies exceeding $2.19 trillion, Dogecoin, endorsed by famous celebrities such as Elon Musk, rose accordingly. 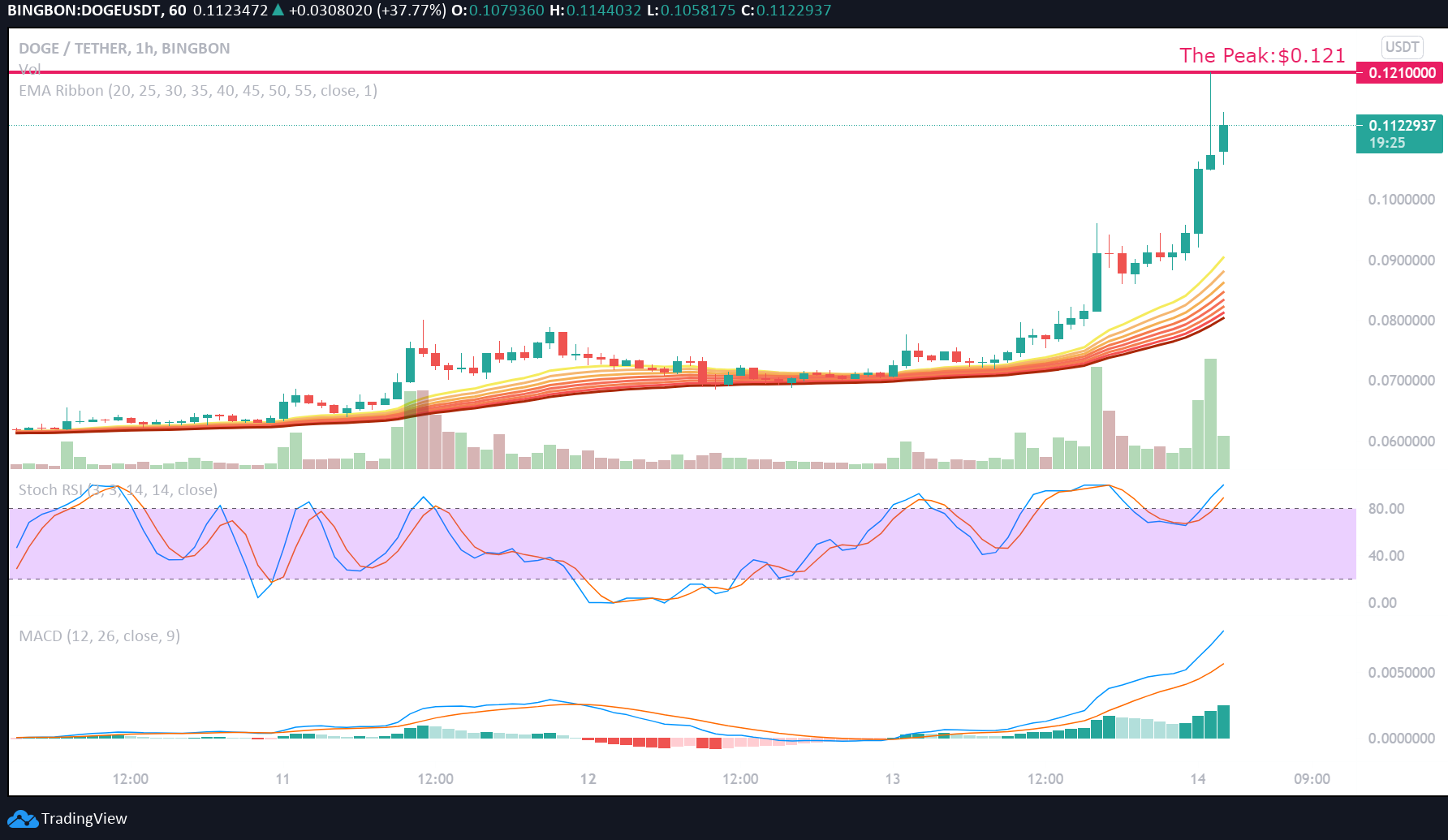 The price of Dogecoin (DOGE) experienced a strong 47% rebound on April 14 and hit a record high of $0.1210. Judging from the one-hour candlestick chart, a long inverted hammer pattern was formed at 1 am on April 14, which indicates that a large number of selling orders were triggered at around $0.1200. This position will become the resistance level of the rollover. But as Dogecoin hit a new all-time high, market experts predict that the cryptocurrency will continue rising in the near future. The enthusiasm of the bulls will translate to how much growth DOGE experiences.

The transaction price of DOGE/USD is much higher than the Exponential Moving Average ribbon. The upward moving average and bullish MACD index also indicate that the bulls are currently dominating the market.

If the bulls can push the DOGE’s closing price above $0.12, then the bullish momentum may prompt DOGE to reach a new all-time high of $0.2.

However, if the result of the Coinbase listing is unsatisfactory, it will cause a systemic selling panic, prompting Dogecoin will to quickly fall to $0.10, and even swallow all of today’s earnings to plummet to $0.07.

On the contrary, the listing of Coinbase has received active attention from investors, consequently leading to new users entering the space to find the next point of speculation. With more and more recognition being attributed to the cryptocurrency space and DOGE’s support by Tesla CEO Elon Musk, Dogecoin is expected to go to the moon.

Kenyan Athlete and Olympic Champion Eliud Kipchoge Gets $40K in ETH After Auctioning...

My wife offered to ‘loan’ me money when I was having financial trouble....
Scroll to top