The buzz around Coinbase’s direct listing is slowly fading, causing investors to return to the home market of the crypto market. The market value of altcoins broke through $1 trillion for the first time, and the Maker successfully attracted the attention of investors.

Amid the price hype surrounding COIN stocks, Bitcoin has successfully broken through the previous resistance level and stabilized at the level of $63K.

This phenomenon has also served to redirect traders’ attention towards the crypto market, which has generated treated yields than the mainstream stock market.

According to official sources, the first entity financing implementation proposal initiated by the MakerDAO governance facilitator and smart contract team has been passed on April 14 and will be implemented on April 16, UTC time. MakerDAO is a smart contract system on Ethereum, providing the first decentralized stable currency Dai (Ether U.S. Dollar) and derivative financial products. The proposal proposes to add a New Silver Series 2 DROP as Maker agreement collateral.

At the time of writing, the price has retraced and is trading at $3,035. 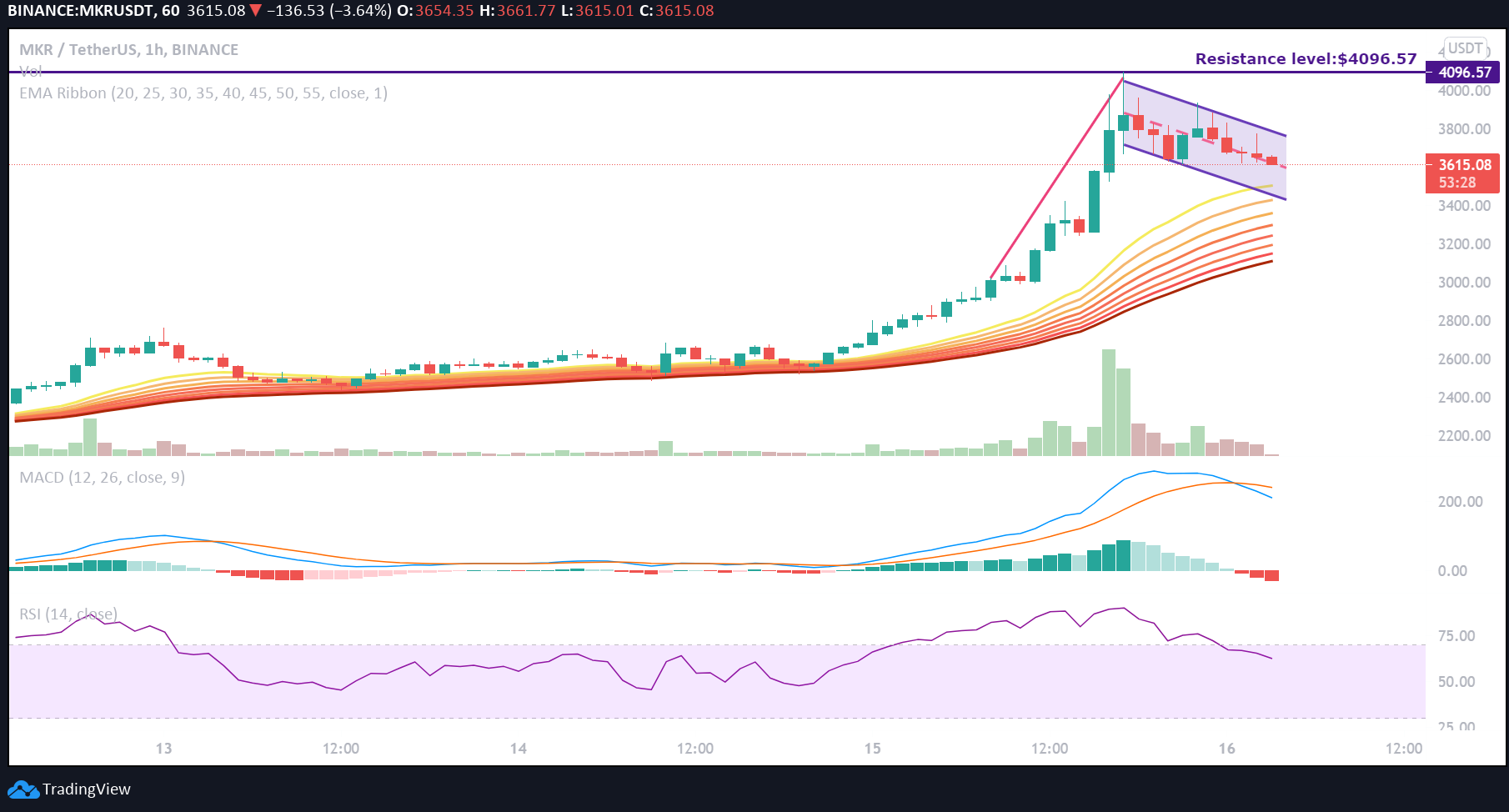 Judging from the hourly candlestick chart, MKR is forming a bull flag shape with the 25% gain at the pink flagpole of this pattern. Currently, the price is consolidating between the $3,600 nearby, and gradually forming the purple flag of this pattern shown on the above chart.

According to the increase of the upswing flagpole, this altcoin would likely exceed $4,500.

However, the long upper shadow line drawn from the daily candlestick indicates that the upward pressure is still huge, and it will suffer a strong selling at its all-time high of $4,096.57.

The transaction price of MKR/USDT is higher than the Exponential Moving Average (EMA) ribbon.

Both the upward floating moving average and the bearish MACD indicate that the bears are currently dominating the market.

However, The Relative Strength Index stepping out of the overbought zone, forming a bearish signal that suggests that MKR is encountering strong selling pressure after touching its all-time high. The MKR’s price will experience a slight retracement, and it is likely to trade sideways for a period of time around $3,400 before resuming its upward momentum.

If the price can stabilize above $3,000, then the upward trend of Maker may open a faster upward channel. As Maker hit a new high- this will mean that the altcoin will not encounter strong selling pressure on its way up. It is very likely to break through $4097.57 in the short term.

Conversely, a surge in the number of sell orders will push MKR below the $3000 support level and may trigger a more severe correction to a 20-day EMA of $2560.

Oxbotica raises $13.8M from Ocado to build autonomous vehicle tech for the online...