Without a doubt, Bitcoin (BTC) has been taking the world by storm based on the notable strides it has been making.

The top cryptocurrency recently breached the psychological level of $60k and set a new all-time high of $61,700. BTC is currently hovering around the $58,830 mark with a market capitalization of $1.09 trillion at press time, according to CoinMarketCap.

Popular on-chain and market analyst Willy Woo has revealed that strong hands are the engine behind the current Bitcoin bull run because they have been buying every dip. He explained:

“This is insanely bullish, of course. Strong hands have been buying every dip, which has been driving the price steeply upwards since Q4 2020. Red bars track the number of coins moving from weak hands to strong hands each day.” 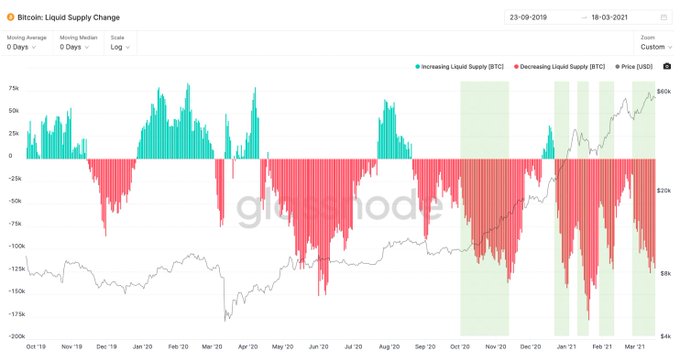 Strong hands are investors who buy Bitcoin for holding purposes other than speculation. Willy Woo went ahead to show that the supply being held by speculative “weak hands” was being depleted. He acknowledged:

“From March 2020, Bitcoin undergoes steep and continued supply shock in sync to USD money printing. Supply held by speculative “weak hands” deplete. These are the coins held by wallet users that have a history of selling coins. This is conservative as BTC held by “strong hands” using exchanges as custody will be classified as “highly liquid”https://blockchain.news/”weak hands” in this chart.” 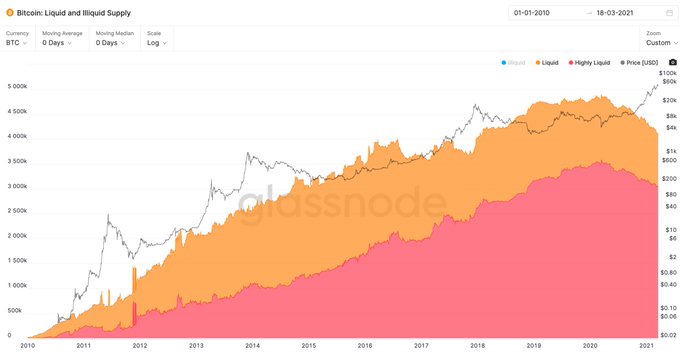 There is room for more upward Bitcoin movement

Glassnode has noted that there is room for Bitcoin to scale even further upwards based on long-term holder data. The on-chain market provider stated:

“Long-Term Holder MVRV at 20+ has been a good indicator of Bitcoin market tops in previous cycles. Currently, at 10, it indicates room for more upwards movement. BTC was trading at ~$4,500 at these levels in 2017 – and made another 4.4x to the peak.” 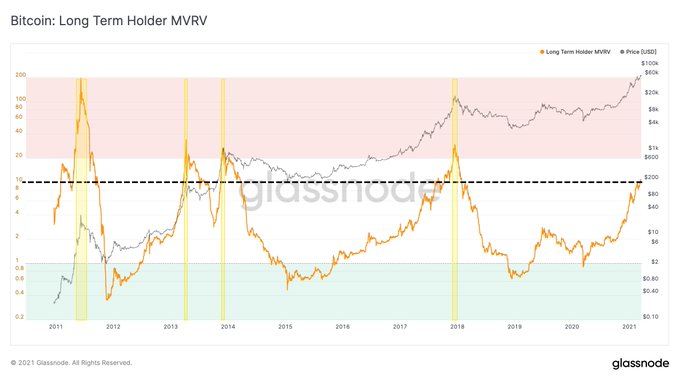 The holding culture is continuously being advocated for in the Bitcoin network. Recently, market analyst Pierre Rochard disclosed that most people might be inclined towards holding Bitcoin compared to investing in stocks, bonds, or real estate in the future.

This is the key question that will determine whether stimulus money overheats...