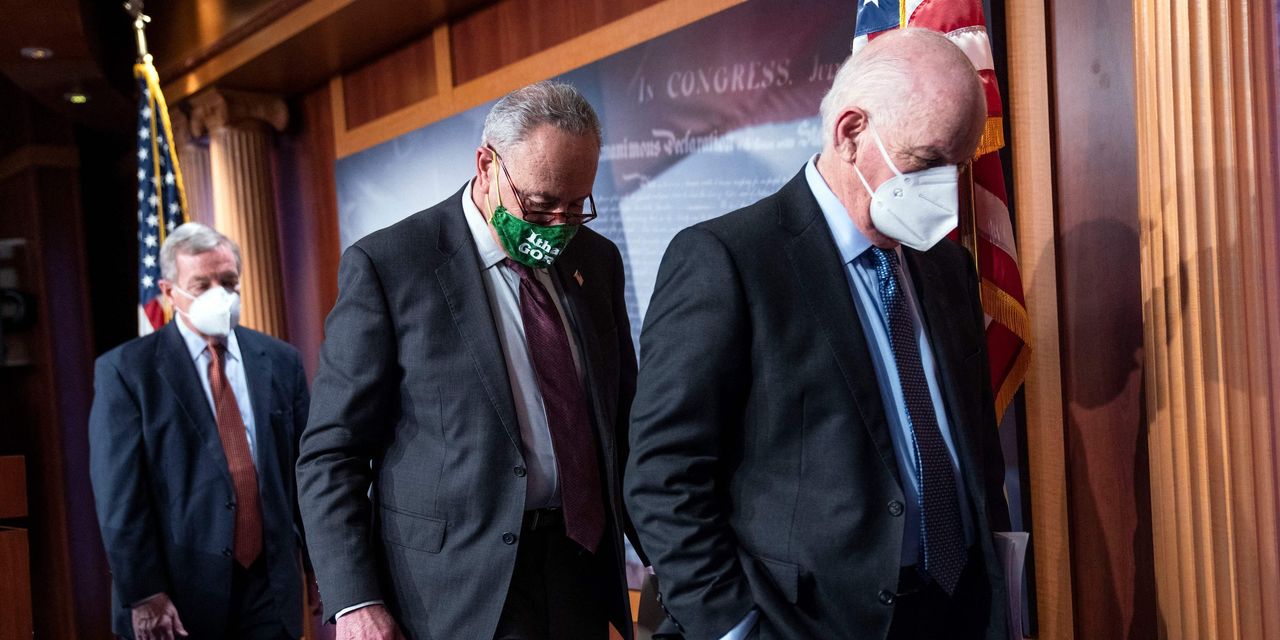 The House of Representatives held 21 roll call votes this past week, mostly on bills with broad bipartisan support. While that was unusual — such bills traditionally have often been passed with voice votes — it was more notable for how fast the votes were: around 30 minutes apiece.

That’s a far cry from the pre-COVID-19 pandemic days when the House, using its electronic voting system, organized party whip groups and restless members could churn through two dozen votes in a single day, at two minutes per tally. But it’s less than the 45 minutes-per-vote system the House had been operating under to keep members distanced and able to vote with less worry about contracting the virus.

And it was a sign that Capitol Hill, like many other areas of American life, is slowly but surely beginning to return to normal as more lawmakers and staff get vaccinated and the level of coronavirus worry ebbs. Lawmakers say there’s still a long ways to go, though.

“There’s a lot of desire for normal, but we’re still a long way from back to normal,” Sen. Roy Blunt, the top Republican on the committee that oversees the administration of the Senate and its office buildings, told MarketWatch. He specifically noted the inability to bring groups in to meet with senators or staffers in person.

Senate Democrats met for their first in-person party gathering earlier this week since stopping them earlier in the pandemic, sitting three each at tables that were themselves spaced six feet apart. They also wore masks, said Sen. Ben Cardin, a Maryland Democrat.

“I thought it worked out fine,” he told MarketWatch.

The speeding up of votes in the House was announced in early April by Majority Leader Steny Hoyer, another Maryland Democrat, in a letter to his fellow Democrats.

“With many Members and a growing number of staff and Capitol workers now fully vaccinated against COVID-19, and with safety measures like mandatory mask-wearing and proxy voting remaining in place, we can begin a graduated return to normal voting procedures,” Hoyer said.

Members are still required to wear masks on the House floor, vote in groups of 87 members each in the currently 430-member body, and leave the floor immediately after they vote.

One of the big pandemic changes made in the House, but not the Senate, was allowing members to cast proxy votes on the floor for other members who are absent but have put in writing how they would vote. That system has been extended temporarily several times and will likely be extended again after its next scheduled expiration May 19.

Rep. Kevin McCarthy, the House Republican leader, said it shouldn’t be extended again and estimated about 75% of House members have now been vaccinated.

While House Republicans have sued to stop proxy voting as unconstitutional, some Republicans have taken to using the system. McCarthy said he opposes anyone using it, with the exception of Rep. Dan Crenshaw, a Texas Republican recovering from eye surgery.

“The one thing you can tell is [there’s] a lot more interest in how we get back to normal,” the GOP’s Blunt said.

He said senators are waiting to see what the Centers for Disease Control and Prevention says are allowable activities for fully vaccinated populations and when things like Capitol campus cafes and cafeterias can reopen for returning staffers. Some have already reopened.

“I think that all happens in the next six months,” Blunt said.

Cardin agreed with that timeline. “I think by the fall, after Labor Day, you’ll see us return to a much more traditional type of arrangements,” he said.

Not everyone wants to go back to the way things were, at least not exactly.

Rep. Derek Kilmer, a Washington Democrat who heads a House committee looking at how to modernize Congress, said he hopes some changes made to deal with the pandemic, like the use of electronic signatures for lawmakers to sign documents and transmitting committee reports electronically, remain.

“It’s a little bit like the beginning of the TV show ‘The $6 Million Man:’ we have the technology,” he told MarketWatch in an interview.

And those Zoom
ZM,

“I think you’ll see some techniques, some committees, sort of experiment with hybrid models, even as we go forward and, quote unquote, get back to normal,” he said.

Cardin said while he will follow CDC guidelines, he won’t be relaxing social distancing or masking until his entire family and grandchildren are vaccinated. For now, that means taking extra precautions around the two or three senators he said have yet to be vaccinated.

“We might be in a committee, but I’m wearing my mask,” he said.

For lawmakers, whose job requires an Olympian comfort level with near-constant human interaction few other occupations have, the return of face-to-face meetings will be the big change.

“It makes a difference, your ability to say to somebody, ‘listen, I’ll meet you for breakfast’ and ‘let’s sit down and have lunch’ or ‘let’s have a cup of coffee somewhere.’ Those are different kinds of relationships than you have on the phone or on a Zoom or a WebEx call,” Blunt said.

“I have had a couple of people from the White House come over this week, which they have not been willing to do before. And it’s helpful,” he said.