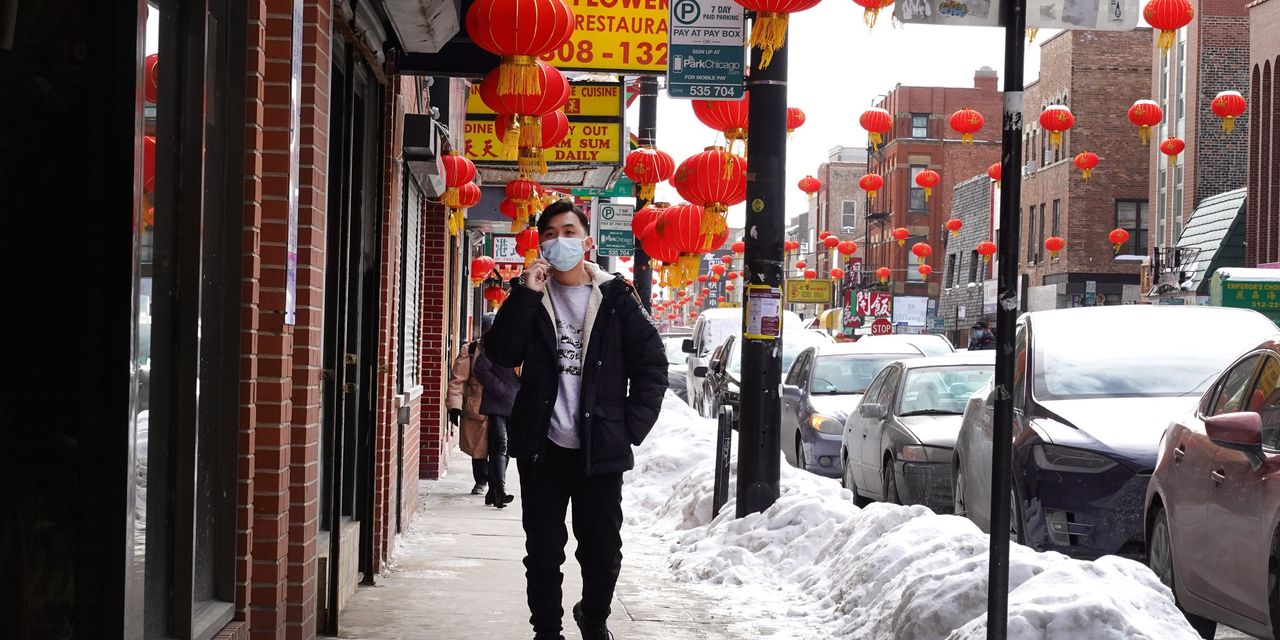 As documented incidents of harassment, assault and discrimination against Asian Americans have escalated during COVID-19, many groups within the community have also faced heightened financial strain. Advocates say it’s beyond time to acknowledge and take action on both.

The March 16 shooting deaths of eight people at three Atlanta-area spas — six of whom were women of Asian descent — have drawn renewed attention to anti-Asian incidents that have grown in frequency during the pandemic. While a motive has yet to be determined, activist groups pushed back on initial police statements that the suspect said he had a “sex addiction” and had not been racially motivated, pointing to historical hypersexualization of Asian women.

Officials charged the shooting suspect with eight counts of murder and one count of aggravated assault. President Biden, alongside Vice President Kamala Harris, planned to meet with Asian-American leaders in Georgia on Friday to offer support and “talk about his commitment to combating xenophobia, intolerance and hate,” press secretary Jen Psaki said.

Victims of assaults earlier this year, also with limited information about motives, included 84-year-old Vicha Ratanapakdee in San Francisco, who died following the attack; a 64-year-old woman in San Jose; a 91-year-old man in Oakland and a 61-year-old man in New York City. The Oakland Chinatown Chamber of Commerce’s president said in late January that there had been at least 20 robberies and attacks in the area in the previous two weeks.

John C. Yang, the president and executive director of the advocacy group Asian Americans Advancing Justice (AAJC), said he had heard “palpable” fear within the Asian-American community about being attacked, harassed or targeted with racial epithets.

“We have heard a lot of fear from the community of going out in public right now,” he told MarketWatch ahead of Lunar New Year. “We have certainly heard from business owners that they are very concerned about this violence.”

COVID-19 has also wreaked economic havoc on many Asian Americans, hobbling businesses and leaving scores of workers jobless. The unemployment rate among Asian Americans shot up more than 450% between February and June 2020, according to a McKinsey & Co. analysis published in August, outstripping other groups’ rate of increase.

While a variety of different factors have driven these twin crises, advocates and experts point to some overlap between the two — including xenophobic stigma that continues to impact many Asian-run businesses, barriers to accessing COVID-19 relief, and mounting mental-health concerns.

“As discrimination has intensified over the course of COVID-19, we have also seen Asian businesses impacted more severely, and we’ve seen a much longer recovery relative to other businesses,” Emily Yueh, a partner in McKinsey’s New York office who coauthored the firm’s report on COVID-19 and Asian Americans, told MarketWatch. “Is it causation? I don’t know that we can argue that. But we definitely see a correlation.”

The “model minority” stereotype has fueled misperceptions about Asian Americans’ recovery from the pandemic, said Gregg Orton, the national director of the National Council of Asian Pacific Americans, a coalition of 37 organizations.

“Everyone assumes that our community is fine because of a perception of economic overperformance from a business or income standpoint, which we know is not the case,” he said.

Indeed, there is incredible income inequality under the vast umbrella of U.S. Asians. While Asian Americans’ overall median annual household income in 2015 was $73,060, many Asian-origin groups had household incomes lower than the figure for Asians overall.

“
‘There’s always a seed of anti-Asian racism just below the surface, and it’s not that difficult to light that match.’
”

“Certainly during COVID-19, Asian Americans have suffered in different ways depending on ethnicity, depending on race, depending on class,” Yang said. “When you fail to disaggregate that data, it looks like the Asian-American community as a whole is doing well — but then you’re masking and making invisible those communities that are suffering and being left behind.”

‘A seed of anti-Asian racism’

Asian-American immigrants have historically been targeted by racist narratives related to lack of cleanliness. In the context of an infectious-disease outbreak, this kind of xenophobia gets wrapped into people’s fear of contamination and easily translates into anti-Asian racism, said Sumie Okazaki, a professor of applied psychology at New York University who has researched racism and mental health in Asian-American communities.

“There’s always a seed of anti-Asian racism just below the surface, and it’s not that difficult to light that match,” Okazaki said. It’s incumbent on leaders and people with social influence to avoid doing so, she added, “but unfortunately, I think what happened last year was just the opposite.”

Also read: Why Asian and Black Americans continue to experience COVID-19-related discrimination — and what you can do about it

Former President Donald Trump drew widespread condemnation last year for describing COVID-19 as the “Chinese virus” and “kung flu,” as experts warned such rhetoric could lead to discrimination against Asian Americans. Trump and his then press secretary, Kayleigh McEnany, denied that he had used racist language.

“What the president does do is point to the fact that the origin of the virus was China,” McEnany said last summer. “It’s a fair thing to point out.”

Stop AAPI Hate chronicled 3,795 hate incidents against Asian Americans between March 19, 2020 and Feb. 28, according to statistics published recently by the reporting center. Many of the incidents included verbal harassment (68%), deliberate avoidance of Asian Americans (21%) and physical assault (11%). Chinese people reported these incidents in the greatest numbers, followed by Korean, Vietnamese and Filipino people; the primary places where discrimination occurred were businesses and public streets.

A combination of “unfortunate role modeling” on the part of some public officials, stress spawned by the virus and stay-at-home orders, massive job loss and heightened stress created “a perfect storm” for a rise in hate incidents, Okazaki said.

“
‘COVID-19 has exposed how much hate, fear, ignorance, selfishness and racism exists in our world.’
”


— respondent to a survey of Mandarin-speaking Chinese New Yorkers

In yet-to-be-published results from Gao’s 2020 survey of 425 Mandarin-speaking Chinese New Yorkers, a recent addition to the broader New York City Longitudinal Survey of Wellbeing, responses to open-ended questions touched on similar themes — for example, the virus exposing the level of ignorance and hatred that exists in society, Gao said.

Some Asian Americans are staying unemployed for longer

The spike in Asian Americans’ unemployment earlier in the pandemic resulted from a combination of factors, including their concentration in jobs impacted by the pandemic: Almost a quarter of employed Asian Americans work in hospitality and leisure, retail, or “other services” industries like personal care, according to a UCLA report published in July. Nearly 26% of businesses in food and accommodation services are Asian-owned, per McKinsey.

Other experts have also pointed out that Asian populations are concentrated in states like New York, New Jersey and California, and in big metropolitan areas, which took devastating economic hits from COVID-19.

The Asian-American unemployment rate, like those of other racial and ethnic groups, has recovered considerably after peaking in the spring. But Asian Americans saw the steepest increase in long-term unemployment between the fourth quarter of 2019 and Q4 of 2020, climbing 25 percentage points, according to a recent Pew Research Center analysis of U.S. government data.

Many Asian Americans may lack knowledge about or access to resources like unemployment insurance and COVID-19 relief measures, Gao added, due to factors like language barriers and fear of impacting their immigration status. Her study findings included mention of difficulty getting a Social Security card and government assistance, she said.


With that said, demographers from the University of Virginia have hypothesized that in addition to involuntary employment, the Asian-American unemployment rate may also include some degree of voluntary unemployment due to heightened COVID-19 fears. They predicted in December that “practical realities and financial pragmatism will organically bring Asians back to the workforce.”

“We expect that the uncharacteristically high unemployment for Asian Americans is temporary and will gradually improve in tandem with other race groups. Opting out of the labor market is not sustainable in the long term,” they said in a Q&A. “With increasing vaccine access and other precautionary measures, we expect the Asian unemployment rate will soon return to be the lowest among all racial groups.”

‘It’s difficult to come back’

Weeks before stay-at-home orders in March 2020 shuttered thousands of businesses across the U.S., Asian-run businesses were suffering due to misinformation and disinformation about the source of the virus, said Yang of AAJC.

The number of active Asian business owners fell by 26% between February and April of last year, a June working paper distributed by the National Bureau of Economic Research also found — far below estimates for Black (41%) or Latino (32%) business owners, but higher than the overall national decline of 22%.

The initial rollout of coronavirus relief programs lacked adequate language-access provisions, making it more difficult for some Asian-owned businesses to get help, Orton added — slowing their recovery and putting their long-term economic health at risk.

“The kind of resources that were available came and went quickly. We know Congress and the White House are discussing additional relief, but it’s difficult to come back,” Orton told MarketWatch. “We feel that we’ve lost important small businesses that are representations of the vibrancy and our important contributions to communities all over the country, and our fear is that it may be very difficult to bring those back.”

Many Asian Americans — including those who own small businesses or who work in nail salons, restaurants and other disproportionately impacted industries — may be experiencing multiple stressors, including their financial situation, COVID-19-generated racism and the virus itself, Okazaki suggested.

“We do know that a number of Asian Americans, even if they’re not directly receiving xenophobic or racist attacks … are quite affected by the news of such attacks,” she added. “It’s anxiety-provoking. It’s fear-raising.”

The Crisis Text Line reported survey results last May that Asian Americans were “experiencing 3x higher rates of racism and discrimination compared to other texters.” Asians and Asian Americans “have experienced higher levels of mental disorders” than their white counterparts, and are twice as likely to report experiences of coronavirus-related discrimination, according to one study published in December.

There’s something in this multidimensional issue for almost anyone to care about, Yueh said.

How to be part of the solution

In a video message in February marking Lunar New Year, Biden drew attention to the “tragedy” of racism, harassment and hate incidents against Asian Americans and Pacific Islanders. “It’s simply wrong. It’s a stain on our national character,” he said.

The president in January also signed a memorandum condemning racism, xenophobia and intolerance against Asian Americans and Pacific Islanders. The memorandum, in part, directed his Justice Department to support efforts to counter harassment and discrimination and expand data collection and public reporting of hate incidents.

Orton called this “a good start.” “Rhetoric-wise, it’s on point, but it really remains to be seen what are the next steps,” he said. “How the federal government [and] Biden’s agencies respond and take action will really be the key in this.”

Advocates say ordinary Americans are part of the solution too: Avoid using stigmatizing language when talking about COVID-19; take a virtual bystander-intervention training to learn how to intervene in harassment incidents without putting your own safety at risk; educate yourself on the facts; and have productive conversations wherever you can have an impact, whether it’s in a boardroom or at the dinner table. Support Asian-American businesses in your community.

While the focus right now is on Asian Americans, it’s also important to recognize the pandemic’s disparate impacts — economic, health-wise and otherwise — on other communities of color, including Black, Latino and Native Americans, Yang added.

This story was originally published Feb. 18, 2021, and has been updated.