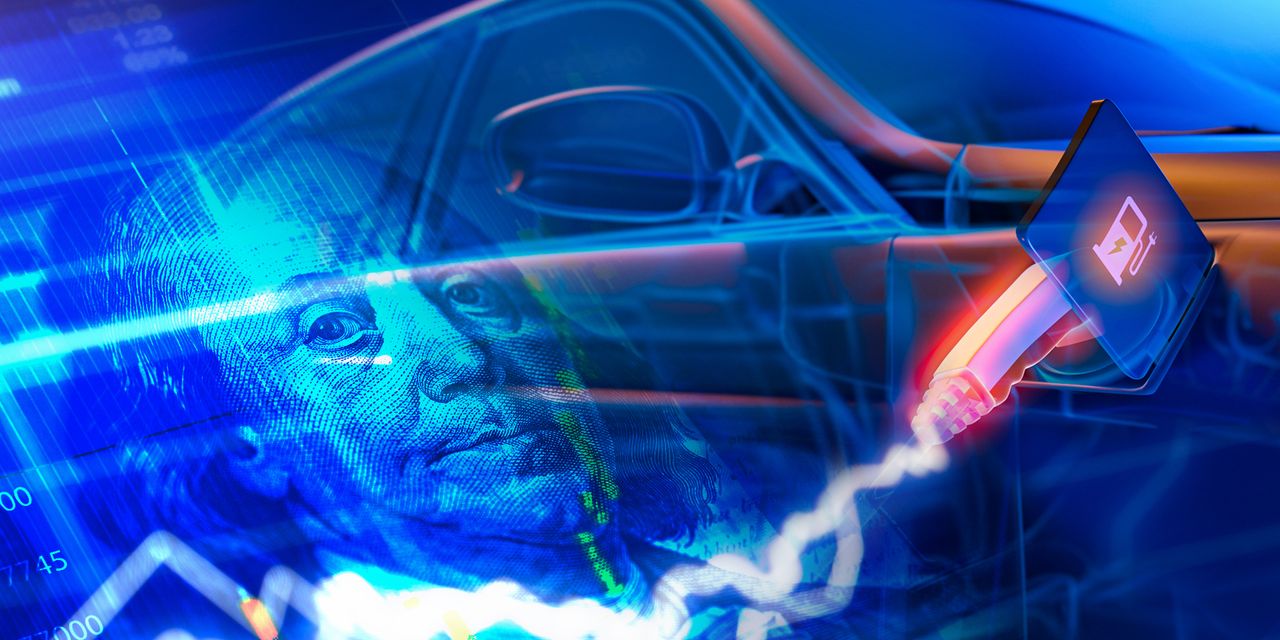 Wall Street and Silicon Valley poured billions of dollars into electric-vehicle and related companies in 2020, betting on their future dominance and in many cases fueling valuations that bear little relation to the companies’ current or expected production and sales.

There is little doubt that the automotive industry is trending toward electric vehicles amid the rise of Tesla Inc.
TSLA,

Declining prices and increasing availability of electric vehicles, or EVs; the potential for technology breakthroughs that offer a cheaper, longer-lasting, and faster-to-recharge battery; strides in EV infrastructure, and “green friendly” government initiatives taking root in the U.S. and elsewhere show the likely path.

And what once was an investment universe comprising solely Tesla and a smattering of fuel-cell companies has burgeoned into a subsector combining industrials, tech and transportation, with China as a major driving force both as EV makers’ base market and for EV demand. In total, at least $28 billion was invested in public and private electric-vehicle companies in 2020, according to data from CB Insights and Dow Jones Market Data Group.

Don’t miss: The explosion in electric-vehicle funding, valuation and trading in one chart

“The writing is on the wall with regard to the long-term EV versus internal combustion debate,” said John Mitchell, a partner at Blue Horizon Capital.

In several countries around the world, people will no longer be allowed to purchase internal combustion-engine vehicles within a short decade or two, and global auto makers have realized that “the transition to electrified vehicles is the only way to compete,” he said.

and other legacy auto makers amped investments in EVs and autonomous vehicles, with GM going as far as vowing to phase out internal combustion-engine vehicles within less than 15 years. Tesla, of course, joined the S&P 500 index
SPX,

That doesn’t mean that the switch from combustion engines to electric cars will take place quickly. Electric cars currently make up around 2% of global auto sales, and estimates for a future market share vary from a low-end forecast of 10% to 20% of cars sold by 2030 to as much as two-thirds of the market by that time.

Much more money will be needed to fund the switch, despite the billions that already found its way to EV-related investments. A recent note from B. of A. Securities put a price tag on a future EV “revolution,” saying that funding that change is still a “tremendous hurdle.”

Extrapolating from the relationship between Tesla’s capital raises and its capacity to make vehicles, the B. of A. analysts calculated that a shift to a 100% EV world would need more than $2.5 trillion in investments, coming from the companies, investors and governments across the world.

Recent capital raises by EV and related companies through the SPACs, or “blank-check” companies, “may be just a beginning,” they said.

‘Hyper growth’ in EV and renewables

The heightened interest in EV and related stocks has led to concerns about a bubble.

At a recent JPMorgan virtual investor conference, head of global research Joyce Chang and others told the audience that they were not seeing “a broad equity market bubble,” but that “certain pockets” of the market were experiencing “hyper growth, such as electric vehicles and renewables.”

Bubbles, of course, are easy to spot — in hindsight. It remains to be seen whether the current influx of money and attention to EV companies, as well as to autonomous vehicles and AV-adjacent companies, will resemble the short-lived notice paid to cloud-computing companies half a decade ago, or the early aughts’ spotlight on fuel-cell companies, several of which — 20 years later — have still not returned to record highs established then.

The Tesla bubble: Bets on electric cars and the rise of SPACs have led to a new version of the dot-com boom, columnist Therese Poletti writes

The JPMorgan analysts reminded the audience that EV, renewables and “innovation” stocks make up a small percentage of the broader equity market, with EVs only around 2% of the S&P 500.

Boding well for the future, however, Blue Horizon’s Mitchell pointed to the increasing quality and technical improvements for EVs.

“Battery life is only going to be extended and with the trillions being invested globally by all those supporting the electrification of the transportation system the infrastructure for widespread adoption and usage of EV technology is only going to increase,” he said.

Analysts at UBS forecast that global auto makers’ revenues from EVs are going to shift to $1.16 trillion by year 2030, from $182 billion today.

Conversely, revenue from ICE vehicles, at $1.77 trillion today, will dwindle to $1.07 trillion. Revenues for software will make an even bigger slice of that revenue pie by 2030, at nearly $2 trillion.

Here’s the UBS chart, in billions:

A company or a business plan?

Blank-check companies have been around for a long time, but took on a larger role in U.S. investing last year, when there were more initial public offerings through special-purpose acquisition companies than all other years combined, Garrett Nelson at CFRA said in a recent note.

Activity in 2021 is on track to exceed last year’s “by a wide margin,” and some of the largest SPAC deals are again likely to be in the “burgeoning electric and autonomous vehicle (EV/AV) space,” he said.

Some of the companies popping in “resemble business plans rather more than revenue- or profit-generating businesses,” but there’s reason for optimism, Nelson said.

The CFRA analyst singled out Fisker, Lucid Motors, which plans to go public via a SPAC merger with Churchill Capital Corp. IV
CCIV,

and privately held electric-truck maker Rivian as companies that are better positioned than others.

Tesla, of course, has established a first-mover advantage widely viewed as substantial.

The UBS analysts calculate that Tesla has a cost advantage around $1,000 to $2,000 per electric vehicle over other auto makers, although competition is increasing. Volkswagen AG’s
VOW,

VW, the No. 2 auto maker in the world, still lags behind in terms of battery costs, with Tesla likely to keep its price advantage in the battery space due to its vertical integration and technology advances, they said. Still, they see that large legacy auto makers such as VW would be able to reach an EV manufacturing cost and margin parity in four years.

EVs, not AVs, could be the real game-changer

Related to investor’s inflows to electric-vehicle makers is the interest generated by lidar, batteries, sensors and other components hailed as key to autonomous vehicles.

Full autonomy has been proven to be a stubborn and costly problem to solve, with regulatory and technological hurdles aplenty.

Despite lofty goals, most cars on the road today offer advanced driver-assistance systems that are not dramatically different from previous years’ systems and still far from being the game-changer they are expected to be for lives and economies in a not-so-distant future.

For now, auto makers are mostly focusing on partial autonomy and ADAS offerings that can be commercialized in the short term, with EVs pulling ahead in terms of consumer interest and regulatory push.