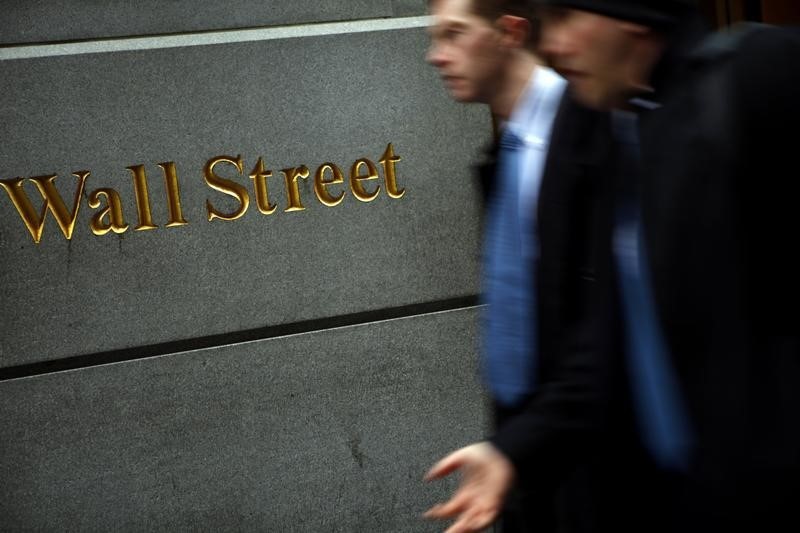 © Reuters. A U.S. flag flies outside The Federal Reserve Bank of New York in New York

The scaled 4,000 for the first time on Thursday and closed up 1.18% at 4,019.87, extending the benchmark index’s gain to nearly 80% from lows in March 2020. The rally has been driven by unprecedented U.S. stimulus measures and expectations that widespread vaccinations against COVID-19 will spur an economic rebound.

Evidence of strengthening economic and corporate growth could support investor confidence after a quarter that saw solid stock gains but also a worrying surge in bond yields and pockets of market volatility, including the wild ride in GameStop (NYSE:) shares and the meltdown of highly leveraged family office Archegos Capital.

Investors also are set to get a snapshot of how companies are performing a year after the onset of the pandemic when corporate earnings kick off in earnest in mid-April.

“We’ve been seeing the volatility over the past few months,” said Matt Hanna, portfolio manager at Summit Global Investments. “There’s always a doubt that perhaps the rug can get pulled out, but now that we’re hitting 4,000 I’m sure that renews confidence in a lot of traders’ minds that this bull cycle is not over.”

Recent history suggests stocks could keep rolling this month, with the S&P 500 tallying its highest average gain in April out of any month over the past 20 years, according to Ryan Detrick, chief market strategist at LPL Financial (NASDAQ:).

One near-term market focus is likely to be whether Congress will pass the infrastructure plan Biden formally introduced this week. It includes $2 trillion in spending but also higher corporate taxes that investors fear could undermine profits.

Coupled with Biden’s recently enacted $1.9 trillion coronavirus relief package, the infrastructure initiative would give the federal government a bigger role in the U.S. economy than it has had in generations. The initial plan calls for spending on everything from roads and bridges to broadband and elderly care, and he may unveil another spending package in April.

Economists at Jefferies (NYSE:) estimate Biden’s infrastructure plan overall could add 0.5 to 1 percentage points to their estimate of 5.2% growth in U.S. gross domestic product in 2022.

With any spending set to come over time, the market impact could be blunted compared to the recent relief package that sent $1,400 checks directly to Americans, investors said.

But more infrastructure spending could fuel shares of companies in the industrials and materials sectors, which have already been among the groups benefiting in recent months from bets on an economic rebound.

“From a market perspective, that cyclical/value area that has been working should have another leg in the second quarter as we see things like this infrastructure package maybe add some more fuel,” said Anthony Saglimbene, global market strategist at Ameriprise.

Biden also plans to raise the U.S. corporate tax rate to 28% from the 21% levy set by the Trump administration’s 2017 tax bill, which had previously been a support for stocks. S&P 500 earnings could take a 7.4% hit from the proposed tax plan, including the higher corporate rate, according to UBS equity strategists.

Investors have taken the tax plan largely in stride as it has come within expectations and may not take effect until next year, but any new tax increase that accompany Biden’s next proposed spending plan could pose a risk, said Walter Todd, chief investment officer at Greenwood Capital.

“The market has digested the initial news very well…,” Todd said. “My concern is potentially the next round may be more expansive on the tax front than people are expecting.”

Corporate results are due in earnest starting in mid-April and overall S&P 500 first-quarter earnings are expected to jump 24.2% from a year ago, according to Refinitiv IBES.

But there could be a downside to increasing profit expectations, said Randy Frederick, vice president of trading and derivatives for Charles Schwab (NYSE:).

“When the expectations bar has been raised as much as it has, then I think that it sets up for some disappointments and that could cause the market to potentially stall out,” Frederick said.

Employment Search Websites Show a Vast Amount of Jobs in the Bitcoin and Blockchain...

Tesla files a petition against U.S. labor board order By Reuters
Scroll to top