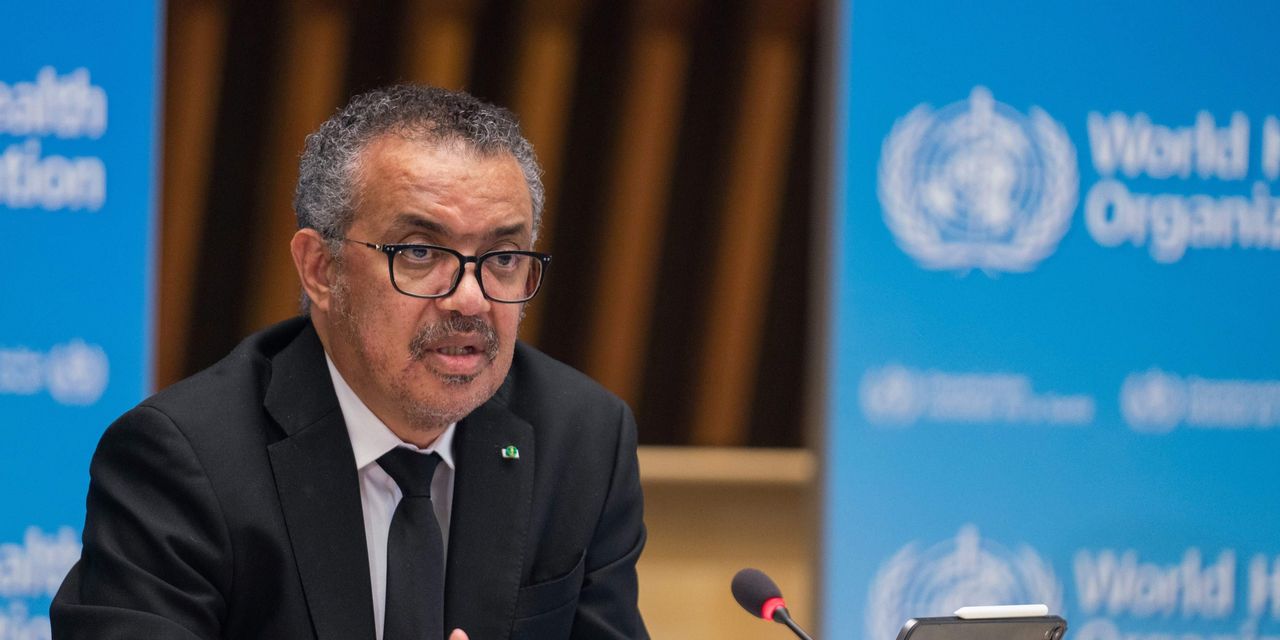 The global death toll from the coronavirus-borne illness COVID-19 climbed above 3 million on Saturday and the case tally rose above 140 million, a day after the World Health Organization warned that cases have almost doubled in the last two months, and are now approaching the highest rate seen since the start of the pandemic.

“Some countries that had previously avoided widespread covid-19 transmission are now seeing steep increases in infections,” WHO Director-General Tedros Adhanom Ghebreyesus told reporters at a briefing.

Case numbers are climbing in nearly all regions, including the Americas, with India, Brazil, Poland and Turkey becoming hot spots. Experts say part of the surge is due to new variants that are more infectious than the original virus. But the gradual easing of restrictions in some places and overall pandemic fatigue are also contributing to the trend.

In the U.S., the Centers for Disease Control and Prevention advisory committee said it will reconvene on April 23 to discuss the blood-clotting issue that has led regulators to pause the rollout of Johnson & Johnson’s
JNJ,

The committee gathered on Wednesday to comb through the data and attempt to understand why six women who were given the vaccine developed a very rare blood clotting disorder, and voted to extend the “pause” and reconvene at a later date.

Read: Johnson & Johnson pause ‘will not have a significant impact on our vaccination plan,’ White House says

Much of the discussion focused on whether committee members needed additional clinical information before making a formal recommendation or whether waiting to make a choice would further harm Americans at risk for contracting COVID-19.

The J&J vaccine was granted an emergency use authorization by the U.S. Food and Drug Administration amid much ballyhoo, as it is viewed as an easier and more equitable tool in the nation’s mass vaccination program because it only requires one shot and can be administered in people’s homes or in mobile units. The other vaccines require two doses set weeks apart and come with stringent storage requirements.

The J&J vaccine also offered a beacon of hope for the rest of the world, and especially for developing countries that are trailing badly in the race to get people vaccinated. The United Nations and WHO have consistently called on wealthier countries not to hog vaccines and have argued that doing so allows new variants to emerge, some of which may prove resistant to the existing vaccines.

The blood clotting issue, which has also been linked to the vaccine developed by AstraZeneca PLC
AZN,

and Oxford University, has undermined confidence in vaccines in some countries where citizens are already skeptical of them thanks to a legacy of colonialism and dubious medical practices by Western companies, the New York Times reported.

In Malawi, people are asking doctors how to flush the AstraZeneca vaccine from their bodies, the paper reported Friday. In South Africa, health officials have stopped giving the J&J shot, two months after dropping the AstraZeneca vaccine. And in the Democratic Republic of Congo, 1.7 million AstraZeneca doses have gone unused, according to the Times.

Dr. Sara Oliver of the C.D.C. told the advisory panel that prolonging the pause in using the Johnson & Johnson vaccine “could have global implications.”

The U.S. vaccine program, meanwhile, continues to show good progress. The Centers for Disease Control and Prevention’s vaccine tracker is showing that as of 6 a.m. Eastern time Friday, 258.5 million doses had been delivered to states, 202.3 million doses had been administered, and 127.7 million people had received at least one shot, equal to 38.5% of the population.

Read now: Here’s how the ‘pause’ on J&J’s COVID-19 shot may or may not affect the company’s earnings

A full 80.6 million people, or 24.3% of the population, are fully vaccinated, meaning they have received two shots of the two-dose vaccines developed by Pfizer Inc.
PFE,

and Moderna Inc.
MRNA,
,
or one shot of the Johnson & Johnson
JNJ,

one-shot vaccine. The AstraZeneca vaccine has not been authorized for use in the U.S.

Among Americans aged 65 years and older, 35.3 million are fully vaccinated, equal to 64.6% of that group. Almost 44 million people in that age bracket have received a first jab, covering 80.4% of that population.

Among Americans aged 65 years and older, 35.3 million are fully vaccinated, equal to 64.6% of that group. Almost 44 million people in that age bracket have received a first jab, covering 80.4% of that population.

The Biden administration will invest $1.7 billion to help states and the Centers for Disease Control and Prevention track and fight COVID-19 variants, the White House announced Friday.

The money is from the COVID-relief law enacted last month, and includes $1 billion for expanding genomic sequencing; $400 million for studying genomic epidemiology; and $300 million for a system for sharing and analyzing sequencing data. The administration says “new and potentially dangerous strains” of the virus make up about half of COVID cases in the U.S. today.

Kessler sought to assuage vaccine fears by reminding Americans that the vaccines that have been authorized have “an excellent safety profile.” Experts emphasize that the six clotting cases associated with the J&J vaccine are a tiny number compared with the 6.8 million people who had received the shot when the pause was announced.

• Pfizer Chief Executive Albert Bourla said it is likely that people who receive COVID-19 vaccines will need booster shots within a year afterward, and then annual vaccinations, to maintain protection against the virus as it evolves, The Wall Street Journal reported. “The variants will play a key role. It is extremely important to suppress the pool of people that can be susceptible to the virus,” Bourla said during a virtual event hosted by CVS Health Corp.
CVS,

is seeking a revocation of the emergency use authorization granted by U.S. regulators for its bamlanivimab antibody treatment for COVID-19 alone in order to complete the transition to bamlanivimab and etesevimab together. “Lilly made this request due to the evolving variant landscape in the U.S. and the full availability of bamlanivimab and etesevimab together,” the company said in a statement. The combination has proved to be more effective in neutralizing the COVID-19 variants that have been detected in the U.S. after first emerging in the U.K., South Africa and Brazil, and that are more infectious than the original virus. The combination is also better at treating the rapidly growing B.1.427/B.1.429 California strain that currently accounts for 50% of virus cases in California and over 10% of cases in other states

• The Norwegian government has pushed back against advice from the country’s public health authority to permanently drop drug company AstraZeneca’s vaccine from its immunization program, saying it needs more time to decide whether to restart use of the shot, MarketWatch’s Lina Saigol reported. The Norwegian Institute of Public Health (FHI) on Thursday recommended ending use of the shot, saying it now has enough information about the “connection between the AstraZeneca vaccine and the rare and serious incidents of low platelets, blood clots and bleeding” to reach its conclusion. The recommendation came a day after Denmark became the first country to permanently stop using AstraZeneca’s shot, after its own review found a possible link to very rare cases of blood clots. Several other European countries have restricted the use of the vaccine to certain age groups.

• India recorded yet another record number of COVID-19 cases on Friday, as hundreds of thousands of Hindu devotees attended a weeks-long festival that brought people in close contact, Reuters reported. Hospitals are running out of oxygen and beds, even after the authorities restricted movement on people in Mumbai, New Delhi and other cities. India counted 217,353 new cases on Friday, marking an eighth record daily increase in the last nine days. India has nearly 14.3 million COVID cases, second only to the U.S.

• J&J reached out to rival COVID vaccine makers to join an effort to study the blood clotting risks and address safety concerns with one voice, but Pfizer and Moderna declined the offer, The Wall Street Journal reported. Pfizer and Moderna executives said vaccines appeared safe, the paper reported, citing people familiar with the matter. The pair also objected because they didn’t see the need to duplicate the efforts of regulators and companies already looking for blood-clot cases and investigating the cause, the people said. One company’s concern: The safety of the Pfizer and Moderna shots could be tarnished by association, some of the people said. Only AstraZeneca, which had been buffeted by similar blood-clotting concerns for weeks, agreed, the people said.

The global tally for the coronavirus-borne illness stands at 140.1 million, according to data aggregated by Johns Hopkins University, and the death toll at 3 million.

Almost 80 million people have recovered from COVID, the data show.

India has replaced Brazil as the country with the second highest number of cases at 14.5 million, and is fourth globally by deaths at 175,649.

China, where the virus was first discovered late last year, has had 102,167 confirmed cases and 4,845 deaths, according to its official numbers.

The consumer sentiment index rose to 86.5 in April from 84.9 in the prior month, according to a preliminary survey by the University of Michigan.

That’s the highest level since the pandemic erupted in the U.S. in March 2020. The index had touched a 16-year high of 101 just a month earlier.

U.S. home builders started construction on homes at a seasonally-adjusted annual rate of 1.74 million in March, representing a 19% jump from the previous month’s upwardly-revised figure, the U.S. Census Bureau reported Wednesday. Compared with March 2020, housing starts were up a notable 37%.

The pace of permitting for new housing units also increased in March, albeit by a smaller amount. Permitting for new homes occurred at a seasonally-adjusted annual rate of 1.77 million, up 2.7% from February and 30% from a year ago.

Economists polled by MarketWatch had expected housing starts to occur at a pace of 1.62 million and building permits to come in at a pace of 1.75 million.

See: The Dow and the Nasdaq are diverging. Why that’s honey for stock market bears