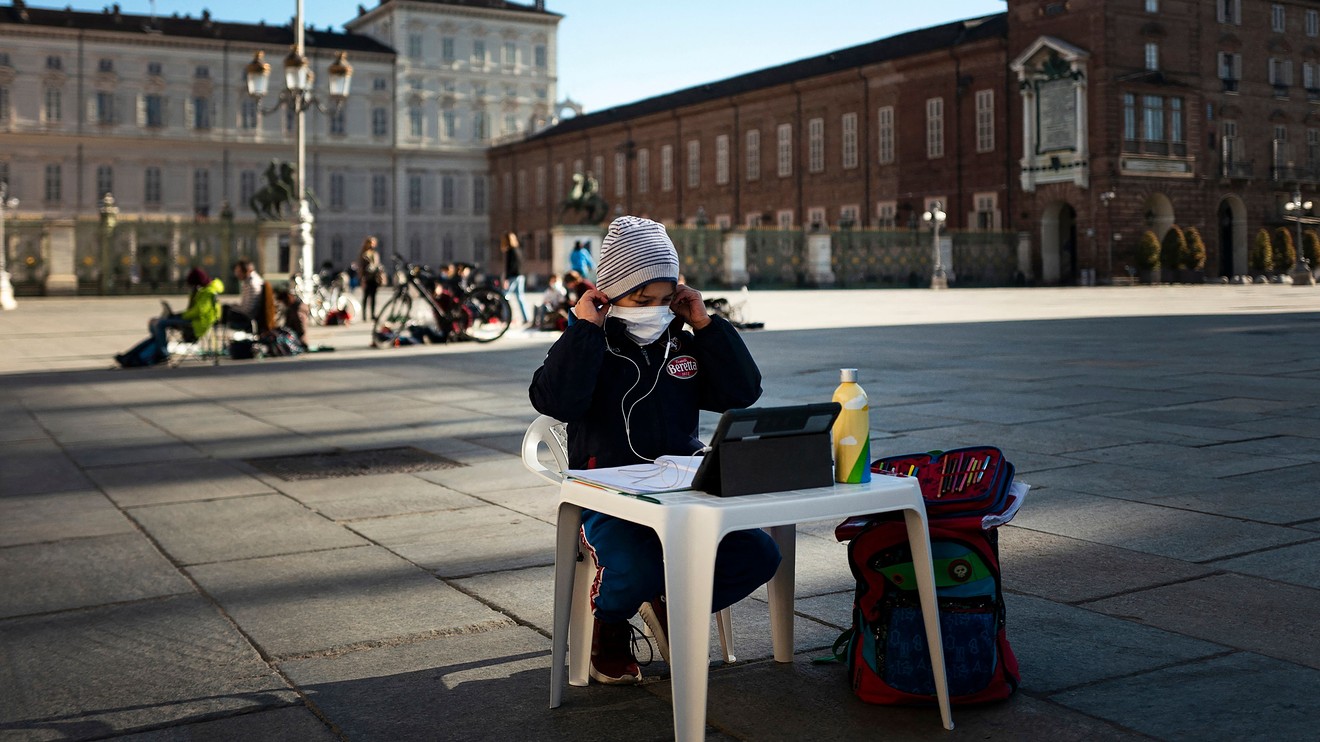 COMO, Italy — The death rate is on the rise.

In the last 24 hours in Italy, there have been 25,735 new cases of COVID-19, with the rate of infection stable at 7%, as half of Italy’s regions are once again in strict lockdown as designated red zones, one year after the entire country was effectively shut down.

For the first time since the color-coded system was introduced last year, Lazio — the region that includes the capital city Rome — was included in the red zone. One in five of those in Lombardy are from Como. And we are back in the red zone. It’s no surprise that Prime Minister Mario Draghi is anxious to get the Oxford-AstraZeneca
AZN,

vaccine back in action, despite concern about adverse reactions.

“
‘I heard the sound of the ambulances today, it’s like a soundtrack from this time last year.’
”


— A resident of Bergamo, the epicenter of the pandemic in Italy last year


Como, Milan, Bergamo, the worst hit city by COVID-19 last year, and the rest of Lombardy are back in the “red zone,” and in full lockdown until April 6. At Easter, the lockdown will extend nationwide, with Sardinia, which had been given the “all clear,” back to join us.

Last time round, hairdressers, barbers, lingerie shops and make up counters remained open — perhaps to lift the spirits of image conscious Italians — but this time they have all been closed up. “We’ll emerge looking like cavemen,” has been one reaction to these measures, but the government is on red alert.

On Thursday, the European Medicines Agency said that the benefits of the Oxford-AstraZeneca COVID-19 vaccine “continue to outweigh the risk of side effects” and added that the one-shot vaccine “is not associated with an increase in the overall risk of blood clots.”

Italy is among several European Union countries to announce a resumption of that drug’s vaccinations in the wake of the regulator’s statement.

In an effort to restore confidence in the vaccine, Draghi himself said he would take AstraZeneca shot. In Rome, Giovanni Rezza, the head of prevention at the Italian Health Ministry, told the Associated Press and other outlets on Friday: “It’s clear that the revocation of the suspension is for us a great relief because we have to strongly accelerate the vaccination campaign.”

That, he added, means doubling the 200,000 vaccinations per day that the country had reached before the vaccine was suspended. It’s a race against time. Thus far, 104,241 people in Italy have died from COVID-19, a 14-day increase of 34%, according to the New York Times tracker. Worldwide, there have been more than 2.7 million fatalities.

‘We came, we were jabbed and we left’

Before it was halted here, AstraZeneca had been administered to teachers in a carpet-bombing like fashion, the speed of the convocations taking us all by surprise.

On a Saturday morning early March, I had woken up to a message to get myself into Milan. Accepting the inevitable fate of inoculation, I hopped out of bed, grabbed a sugar cube from the bowl on the way out the door for old time’s sake, and took off down the motorway to the city.

By late morning, I was standing in line, catching a glimpse of co-workers I hadn’t seen in the flesh for over a year, and struggling not to run across the lawn to given them a hug. We came, we were jabbed, and we left. At midday, I was in my car heading back to the lake.

Thankfully, my colleagues have all weathered the 48-hour storm of fever and chills. I on, other hand, have not.

Shortly after the vaccine was temporarily suspended, college websites published an announcement that those who have been vaccinated, and who have not had any serious repercussions, should rest easy.

“
‘There’s little advice out there, however, for people who have had persistent side effects.’
”

There’s little advice out there, however, for people who have had persistent side effects. Meanwhile, my pulse rate had shot up to 120 as I gasped my way into the emergency room in Como in the early hours of one morning this week.

Ten days after I got my shot, the local hospital was a-buzz with patients. I practiced meditation to escape the sound of wailing and moaning from other cubicles.

That may be why the vision of Dr. Strada, who gently woke me up from my trance, has become firmly imprinted in my psyche — much like a hatched duckling catching a glimpse of its carer and latching onto that thought for salvation. Despite the surrounding turmoil, Dr. Strada is gentle, patient and serene, and made me feel safe.

He is one of the “many magnificent examples” of “silent protagonists of solidarity” that Draghi commended in his speech on March 18 at the cemetery in the city of Bergamo, as he laid a wreath on the stele dedicated to the city’s 3,400 official victims of the virus — although other estimates put that figure at closer to 6,000.

This was the day that President Sergio Mattarella has officially established as “National Memorial Day for all the victims of the coronavirus epidemic.” Bergamo has now become a symbol of the pain of the entire nation, with Draghi’s address inciting a commitment to care for our elders, to never again leave them alone and unprotected.

In April 2020, a local newspaper reported that there had been 1,322 more deaths in nursing homes in Bergamo compared to 2019. The city had become a hotbed for the pandemic, with many of the elderly taken into the hospitals where no protective procedures were fully in place.

Draghi went on to remember the field hospital that was erected in just a few days by the Alpini, the Civil Defense and volunteers. He concluded by acknowledging the support that Italy has received from Europe, likening it to a family that has remained by our side.

Local poet Ernesto Olivero has written a poem for the many who have died, now engraved in stone in the cemetery. The words may be dedicated to his hometown, but they extend out into the world. What unites victims of this pandemic is solitude, provoked by the forced isolation that loved ones have had, and are still having, to endure. And the seclusion that others have faced in their death.

The poem reads: “You are there. I’m convinced you are there beside the people who die alone, alone, with sometimes glued on the resuscitation glass the drawing of a grandchild, a heart, a kiss, a hello. You are there, close to each one of them, you are there, by their side as they struggle, you are there and you catch their last breath, the surrender of love to you…”

Locals didn’t initially comprehend the arrival of the long columns of military vehicles rolling through the streets in those early days of March last year. It only gradually began to dawn on them that the mortuary and crematorium had reached their full capacity and the coffins, which were lining up in the town’s only cemetery, had to be taken elsewhere.

“
‘Nobody was singing on the balconies here in Bergamo. We were horrified, we were terrified.’
”

People are angry, they want to know how and why this happened. They feel the government failed them, and that the measures taken were too little too late. “We felt blindsided, with little information on what was happening,” says one Bergamasco, who has been in self-imposed quarantine since the outbreak. “Nobody was singing on the balconies here in Bergamo,” she is quick to add. “We were horrified, we were terrified.”

The hashtag #noidenunceremo or #wewilldenounce has been trending since March 2020. Its quest is for justice, and its mission is heartfelt — this is a people trying to elaborate their grief. “If someone could have acted and didn’t, if someone has put their own interests before the lives of thousands of people, they will pay criminally for their actions and answer for their negligence,” the resident, who asked to have her name withheld, said.

To achieve their goal, they have set up a non-profit committee so as to gather every complaint and make all their evidence and grievances available to the judiciary so there will be a thorough investigation and a trial. By April 2020, they already had 50,000 members, which has risen to 70,000.

“We were the first to get the virus, and we’ll be the last to get rid of it,” continues the Bergamasco resident. “Almost everyone here knows someone who has died.” They are still haunted by images of firefighters rescuing the seriously ill from their flats, to entice them out of their homes for treatment.

“The lockdown started late, the industrial sector didn’t want to shut up shop, and no swabs were done at the local hospital of Alzano until the situation had gotten out of hand. I still can’t get my head around it. I’m still incredulous. And I think it can happen again. I heard the sound of the ambulances today, it’s like a soundtrack from this time last year.”

The Oxford-AstraZeneca medical leaflet has since been updated. and the vaccine has been re-released on the Italian market with those 200,000 suspended doses to be resumed over the next two weeks.

And my side effects? Until now, they have shown no signs of subsiding. Doctors appear puzzled and at a loss to give a prognosis. They simply don’t have the facts. They will report it and send you for tests. And cross their fingers that they can find out some answers. As we face this Pandemic Year 2, we all are walking on new ground.

Alison Fottrell is a teacher and writer living in Como, Italy.

This essay is part of a MarketWatch series, ‘Dispatches from a Pandemic.’

Brazil Becomes the First Latin American Country to Get Its First Bitcoin ET...
Scroll to top