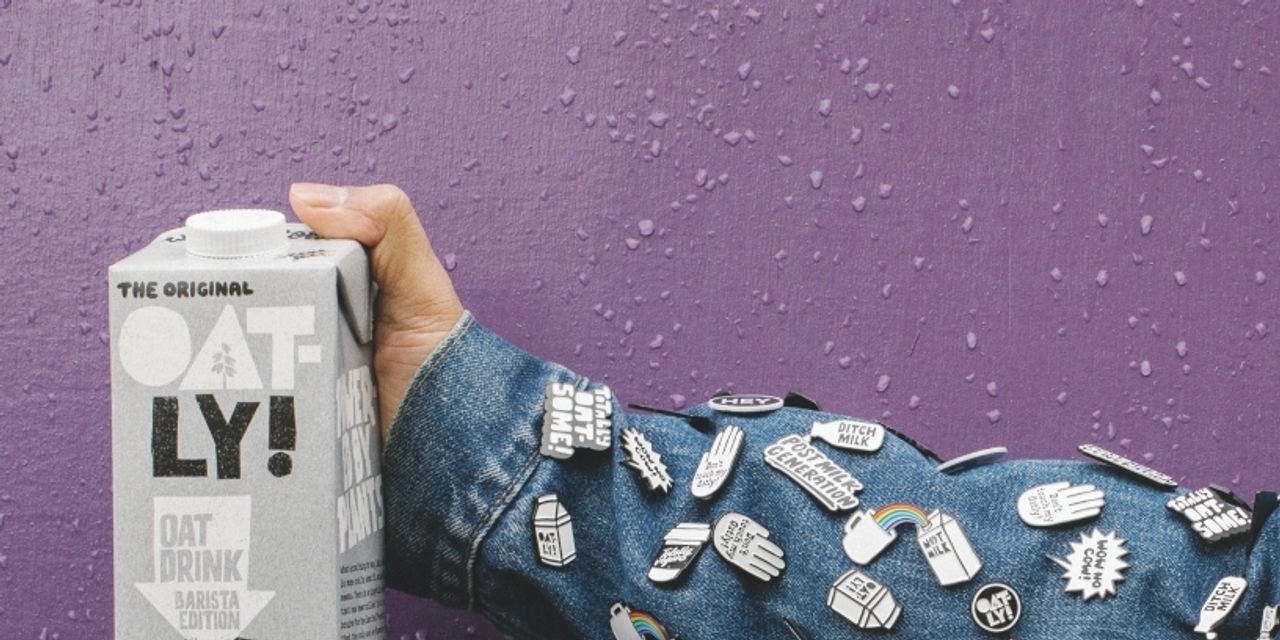 After first filing for its IPO confidentially in February, plant-based food company Oatly Group AB began trading on Thursday, with the stock soaring more than 30% out of the gate.

The stock retreated within minutes to a 26.5% rise, trading at about $21.30, which values the company at $12.6 billion. It’s trading on the Nasdaq under the ticker “OTLY.”

Oatly is backed by private-equity group Blackstone Group, as well as celebrity names like Oprah Winfrey and Jay Z who invested $200 million in the company last summer. That investment valued the company at $2 billion at the time, according to The Wall Street Journal.

Based in Malmö, Sweden, Oatly has been in the oat milk business for 25 years. The company’s product lineup now also includes frozen desserts and “oatgurt,” an alternative yogurt.

Toni Petersson has been Oatly’s chief executive since 2012, and will join the board once the company is publicly-traded.

The company is going public at a time when climate change and sustainability issues are top of mind for many consumers, particularly younger ones.

“Generation Z and Millennials will become the dominant global generations in the coming years, bringing to the market a new set of values and expectations,” the company said in its prospectus.

“These combined factors are driving a clear rapid, accelerating growth and influx of new consumers to the plant-based dairy market.”

According to the Plant Based Foods Association and Good Foods Institute, plant-based-food sales reached $7 billion in 2020.

Consumer Insights data quoted in the prospectus says the plant-based milk category will grow 20% to 25% over the next three years.

Oatly is focused on its role in helping to transform the food industry in order to be better for the environment and meet the health needs of its customers. The company points out that substituting a cup of Oatly for a cup of cow’s milk reduces greenhouse gas emissions, land use and energy consumption.

Tastewise, which provides food and beverage data and intelligence, said in a December 2020 report that “plant-based everything” will be one of the top 10 U.S. trends for this year.

“The number one reason consumers turn to plant-based food and beverage? Health,” the report said.

“Plant-based is no longer just an ‘alternative’ to meat, but rather a significant
category in itself.”

Oatly’s key markets are Sweden, Germany and the U.K., though its products were available in 60,000 retail stores and 32,200 coffee shops around the world as of December 31, 2020. Among the places where customers can find Oatly is Starbucks
SBUX,
,
where demand was so high there was a shortage soon after the coffee chain introduced beverages made with the item.

COVID-19 has impacted Oatly’s business as lockdowns around the world limited access to restaurants, bars and other dining establishments.

In 2020, Oatly had revenue of $421.4 million, up from $204.0 million the year before. However, the company reported a loss of $60.4 million “reflecting our continued investment in production, brand awareness, new markets and product development,” the prospectus said.

Oatly warns that it has reported losses over the last “several” years and expects operating and capital expenses to rise “substantially.”

“Our expansion efforts may take longer or prove more expensive than we anticipate, particularly in light of the COVID-19 pandemic, and we may not succeed in increasing our revenue and margins sufficiently to offset the anticipated higher expenses,” the company said in its prospectus.

“We incur significant expenses in researching and developing our innovative products, building out our production and manufacturing facilities, obtaining and storing ingredients and other products and marketing the products we offer.”

Here are five more things to know about Oatly ahead of its public debut:

Oatly will not pay a dividend for the “foreseeable future.” The company plans to use the proceeds from the offering as working capital, for incremental growth, including expansion, and other general purposes.

Coffee provided a gateway for Oatly in the U.S. Oatly arrived in the U.S. in 2017. The company says it “focused on targeting coffee’s tastemakers, professional baristas at independent coffee shops” as a way to enter the market.”

Oatly can also be found in 11,000 coffee and tea shops in China, and at more than 6,000 retail and specialty shops across the country, including thousands of Starbucks locations.

Limited oat supply could have a financial impact. Oatly depends on five suppliers for the oats it uses, purchasing this ingredient through millers in Sweden, Denmark, the U.S. and Belgium.

“We have in the past experienced interruptions in the supply of oats from one supplier that resulted in delays in delivery to us,” the company said, noting that its oat supply is also vulnerable to natural disasters such as drought or floods.

“We could experience similar delays in the future from any of these suppliers.”

The company also depends on select suppliers for enzymes, including one supplier that provides an enzyme for some of Oatly’s products, including Barista Edition oat milk.

The main components of the company’s products are manufactured in four primary facilities as of March 2021, which could also be a problem if something significant happens at any one facility.

and Lactalis as competitors, as well as the growing array of plant-based dairy alternative companies that are entering the market, including soy, almond, hemp and cashew milk brands.

All of these companies are competing for a finite number of retail stores, coffee shops, foodservice clients and consumers.

“In order for us to not only maintain our market position, but also to continue to grow and acquire more consumers, some of which may be switching from traditional dairy to plant-based alternatives, we must continue to provide delicious, high-quality products, and consumers must believe in our vision for a food system that is better for people and the planet,” the company said.

Don’t miss: America is set to reopen on July 4 and restaurants are poised to benefit from a desire to ‘get out and gather,’ says JPMorgan

Oatly’s marketing and COVID-19 might be a hurdle to growth. Oatly says that its history of “provocative and unconventional marketing and advertising campaigns” has gotten them into hot water, including a 2014 lawsuit filed by the Swedish dairy lobby in which the courts found Oatly was “disparaging to dairy products.”

“The decision resulted in a ban on our further use of a number of expressions marketing our products in Sweden, under the penalty of liquidated damages of SEK 2 million per expression,” the prospectus said.

The company cautions that future marketing could drive other legal action.

Connecting IoT and Blockchain to Supercharge Progress
Scroll to top