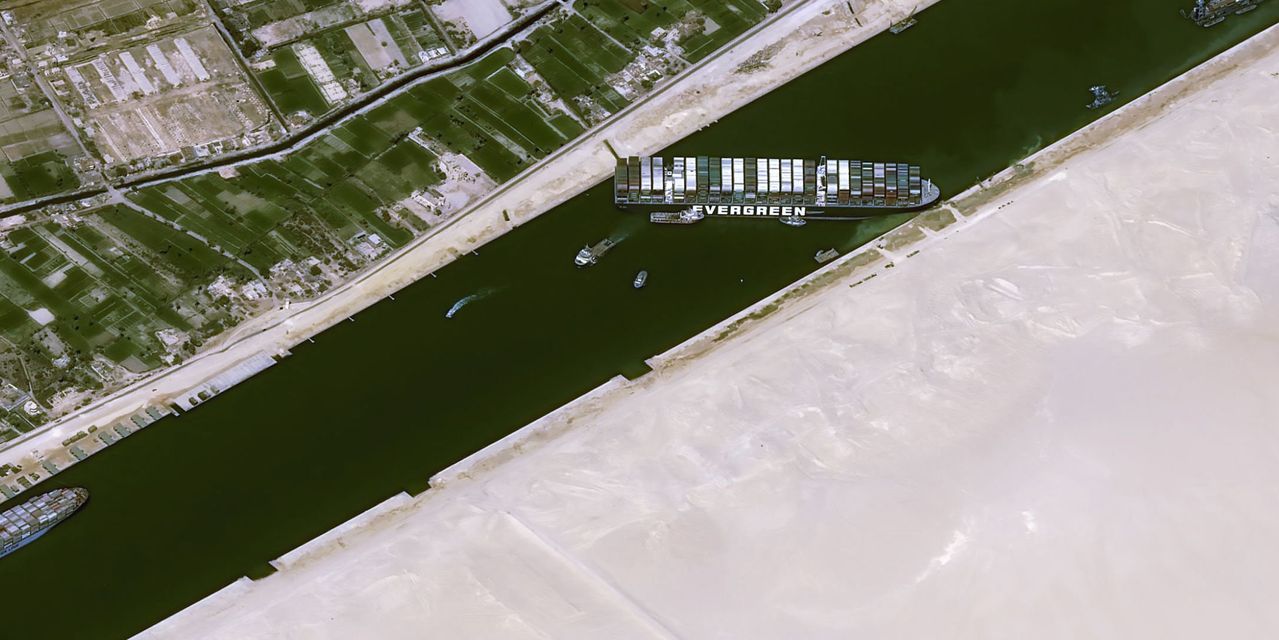 Crude-oil futures traded higher Friday as a 220,000 ton cargo ship blocked the Suez Canal for a fourth straight day and efforts to dislodge one of the world’s largest container vessels from the critical trade waterway have proved unsuccessful.

The narrow canal is a crucial chokepoint for Persian Gulf oil and uncertainty about how long it will take to remove the tanker have complicated the near-term outlook for energy assets.

Read: Why the blockage of the Suez Canal matters for oil prices

On top of that, energy traders are struggling with extended business lockdown in parts of Europe to combat the coronavirus pandemic, implying less demand for energy products.

Those two events have been whipsawing crude prices, which have been vulnerable to headline news after both the U.S. and international benchmark oil contracts fell into correction earlier this week, defined as a drop of at least 10% from a recent peak.

“The market is up again as traders in a change of heart decided that the Suez Canal blockade is actually becoming more significant for oil flows and supply deliveries than they previously concluded,” wrote Paola Rodriguez Masiu, Rystad Energy’s vice president of oil markets.

“The oil market is swinging wildly from gains to losses and gains again this week, a clear sign of the uncertainty that the Suez Canal blockade and European lockdowns are creating,” Masiu said.

Check out: Concerns over the Suez Canal accident tilt toward natural gas

It’s unclear how long the Suez Canal blockage will remain but some experts are predicting weeks rather than days. “This now looks like it will take a few weeks,” Anoop Singh, the Singapore-based head of tanker analysis at shipping broker Braemar ACM, was quoted by the Wall Street Journal as saying.

An estimated 10% of total seaborne oil trade passes through the Suez Canal which connects the Red Sea with the Mediterranean Sea.

Reuters reported that the owner of the MV Ever Given container ship, Shoei Kisen, denied speculation that it could be removed as early as Saturday night, which would have set the stage for downdraft in energy prices.

The blockage has disrupted the flow of oil through the canal but for the week, WTI crude was still on pace for a loss of 0.7%, while Brent crude edged down by 0.2%, based on the front-month contracts.

The mishap “will not have a major impact on global oil benchmarks, even if the blockage continues for weeks because oil stockpiles are simply too high for supply to become a major concern for the market right now,” Tyler Richey, co-editor at Sevens Report Research, wrote in Friday’s newsletter.

The Energy Information Administration on Wednesday reported a fifth straight weekly rise in U.S. crude inventories, which current stand at nearly 503 million barrels — about 6% above the first-year average for this time of year.

Given ample supplies, traders have focused on the “deteriorating fundamentals due to European lockdowns and the subsequent revisions lower for consumer demand estimates for the medium term,” said Richey.

Still, in a note dated Friday, analysts at Goldman Sachs view the decline in prices as “far overshooting the shifts in oil fundamentals.” They expect a return of lockdowns for most of the European Union region through April, but said the impact on transportation will likely remain modest.

Goldman Sachs expects global demand to accelerate by 4.5 million barrels per day into the third quarter compared with the first quarter, though that’s 800,000 barrels per day lower than its previous forecast.

The analysts also expect a “slower ramp-up” in production from the Organization of the Petroleum Exporting Countries and their allies, together known as OPEC+, this spring to “help offset” both slower emerging market and European Union demand recovery and higher Iranian exports, “with global demand still set to increase sharply through the summer.”

was flat at $2.57 per million British thermal units, headed with a weekly rise of 1.4%. The contract will expire at the end of Monday’s session.