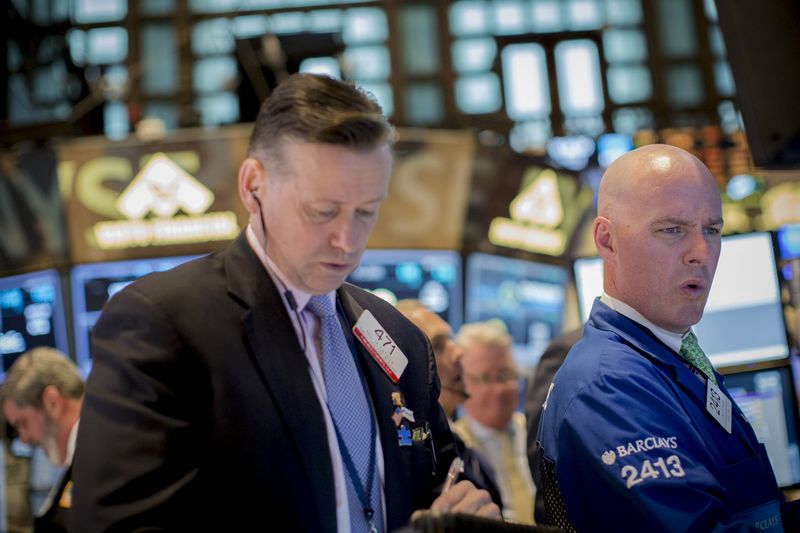 Investing.com – The Dow and S&P 500 eased from record highs Friday, as financials cut some gains despite better-than-expected earnings from Wall Street banks.

Morgan Stanley (NYSE:), Bank of New York Mellon (NYSE:) and PNC Financial Services (NYSE:) reported first-quarter results that beat estimates on the top and bottom lines, but it was the latter that got the plaudits rising more than 2%.

Other regional banks were also higher, with U.S. Bancorp (NYSE:) leading the charge, up 3% as its better-than-expected quarterly earnings released Thursday, stoked optimism on Wall Street.

US Bancorp has started to “experience a rebound in its fee based businesses along with the improved credit picture, which should reassure investors that the company will navigate this downturn better than nearly all of its peers and should maintain its premium valuation to the group,” RBC said.

Financials have been kept under pressure in recent session as falling yields, with analysts warning that any further deterioration in rates would likely continue to weigh on cyclicals.

“The bottom line here is- if the TNX (10-year Treasury yields) continues to push lower over the short-run, these themes / strategies [small-caps, value, and financials] will also continue to underperform (over the short-run),” Janney said.

Materials were lifted by a 10% surge in PPG Industries (NYSE:) in the wake of its better-than-expected first-quarter results and upbeat second-quarter guidance released Thursday.

The University of Michigan said Friday its preliminary index rose to a 86.5 in the first half of this month from 84.9 in March, hitting its highest level in a year.

Energy, meanwhile, slipped as oil prices gave up gains despite optimism over the global recovery after China reported record GDP growth in Q1.

Big tech, meanwhile, consolidated its gains with the Fab trading mixed even as U.S. bond yields drifted from session highs

Google-parent Alphabet (NASDAQ:), Facebook (NASDAQ:), and Apple (NASDAQ:)  were lower, while Amazon.com (NASDAQ:) and Microsoft (NASDAQ:) were above the flatline.

In other news, Splunk (NASDAQ:) fell more than 7% after KeyBanc downgraded the stock to sector weight from overweight following the resignation of chief technology officer Tim Tully.

The resignation comes at a “tough time” for the company as it transitions to a subscription model this year, KeyBanc said.