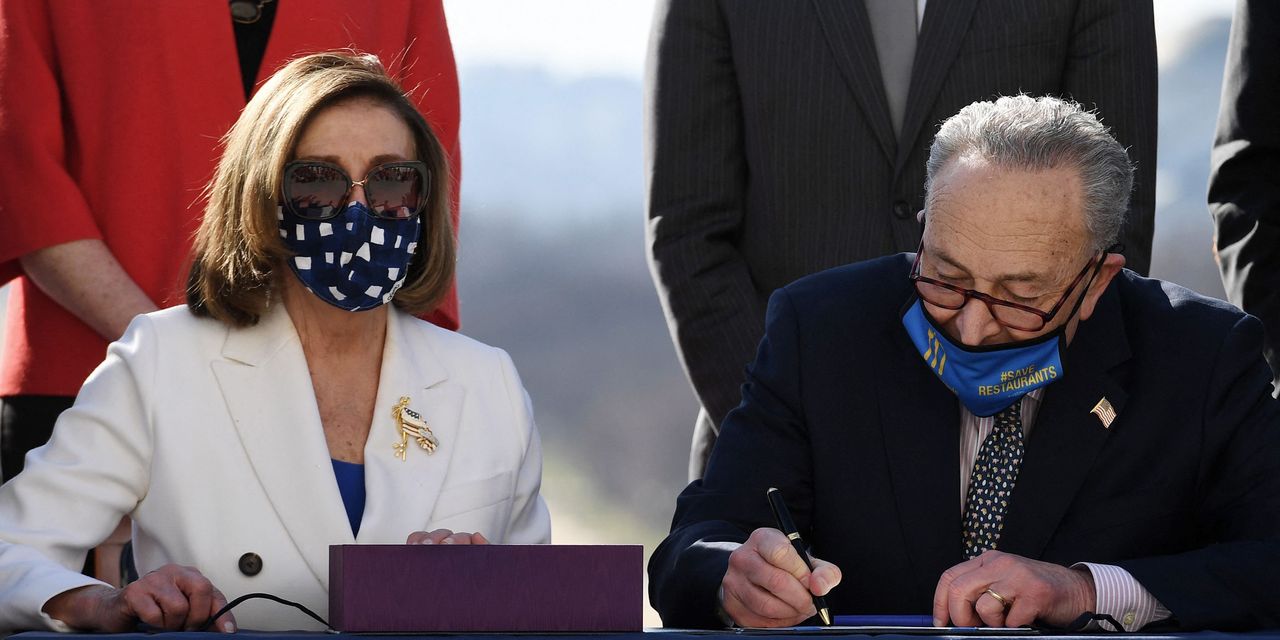 The question still reverberating in financial markets is to what degree the $1.9 trillion coronavirus relief will be spent, either immediately or if the virus recedes enough for shoppers to be allowed, and wanting, to go out.

This column previously pointed to surveys of both how the initial $600 stimulus was used, and plans for the $1,400 that has arrived for many households, to suggest much of it won’t be deployed into the economy.

Another way to look at it is if households perceive the stimulus to be additional income or additional wealth. Studies have shown that the propensity to spend out of wealth is just 5%, while the propensity to spend out of income ranges from 10% to 50%, according to a recent speech from Gertjan Vlieghe, a voting member of the Bank of England’s Monetary Policy Committee.

Dhaval Joshi, chief strategist at BCA Research, says whether the new stimulus is considered wealth or income depends on whether the household receiving it has a low or high income to begin with. But looking at past stimulus checks, there weren’t meaningful shifts in either consumption or inflation.

“Given that the bond market is useless at predicting inflation, it is also useless at assessing real interest rates,” he says. If the bond market is exaggerating the future level of inflation, than the correct inflation-adjusted bond yield should be even higher. “The important takeaway right now is that in any comparison with the real bond yield, equities and other risk-assets are even more expensive than they appear.”

Talks between the U.S. and China got off to a frosty start in Alaska, with public criticism made by each side in opening remarks.

may climb after the delivery service said fiscal third-quarter earnings rose by more than analysts anticipated and guided for a stronger current quarter than expected.

may slip after the apparel maker reported slower sales growth than expected in its fiscal third quarter.

has made a $65 per share offer to buy rival insurer Hartford Financial Services Group
HIG,
.

The Bank of Japan removed targets for purchasing exchange-traded funds and real-estate investment trusts and widened the band it will allow 10 year bonds to trade in.

After the 7% plunge in crude-oil prices on Thursday, light-sweet crude futures
CL.1,

were a bit higher. Analysts at UBS say to focus on the pace of COVID-19 vaccinations, which should help ease restrictions and support oil demand.

The yield on the 10-year Treasury
TMUBMUSD10Y,

a diversifier? It is a huge debate in markets, that several major banks have taken on in just the last two weeks. Sven Henrich, the technical analyst who runs the Northman Trader website, produced this chart, showing that correlation between the weekly flows into bitcoin and stocks is at the highest level ever.

The tulip craze in the 1600s is often cited by financial market analysts when discussing speculative manias. For irony lovers, there are nonfungible tulips — that is, illustrations of tulips sold on the blockchain — for sale.

A shark with wings? Scientists puzzled over fossil found in Mexico.

Need to Know starts early and is updated until the opening bell, but sign up here to get it delivered once to your email box. The emailed version will be sent out at about 7:30 a.m. Eastern.

Want more for the day ahead? Sign up for The Barron’s Daily, a morning briefing for investors, including exclusive commentary from Barron’s and MarketWatch writers.