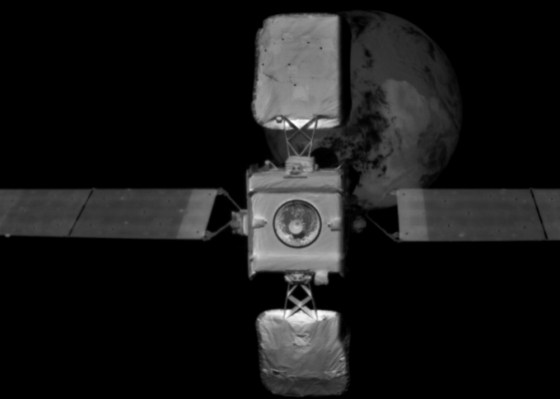 Northrop Grumman hit a new milestone in extending the life of active spacecraft as a purpose-built spacecraft, MEV-2, docked with Intelsat’s IS-10-02 satellite to give it another five years of life. It’s a strong demonstration of the possibilities in a growing field of orbital servicing operations.

MEV-2 launched in August and matched the orbit of Intelsat’s 18-year-old satellite, which would have soon been due for decommissioning, having exceeded its original mission by some five years. But it’s precisely this type of situation that the new “on-orbit service, assembly and manufacturing,” or OSAM, industry intends to target, allowing such satellites to live longer — likely saving their operators millions.

In today’s operation, the MEV-2 spacecraft slowly approached IS-10-02 and docked with it, essentially adding itself as a spare engine with a full tank. It will stay attached this way for five years, after which it will move on to its next mission — another end-of-life satellite, probably. “You can think of MEV-2 as a jetpack for the 10-02 satellite,” said a Northrop Grumman representative.

The docking process is really more of a clamping-on than a docking, since while there’s a mechanical fit between the MEV-2’s probe and the IS-10-02’s engine cone, it’s not like they’re making a seal and exchanging fluids or power. The representative explained:

The MEV-2 docking system consists of a probe that we insert into the liquid apogee engine on the aft end of a satellite. Nearly 80% of satellites in orbit have this featuring, allowing the MEV service a variety of customers. The liquid apogee engine acts as a “cone to capture” to help guide the probe which once it passes through the throat of the engine, expands to capture the client satellite. The probe is then retracted pulling three stanchions, or feet, up against the launch adaptor ring, securely clamping the two vehicles together.

Last year the MEV-1 mission performed a similar operation, docking with Intelsat’s IS-901 and changing its orbit.

But in that case, the satellite was inactive and not in the correct orbit to return to service. MEV-1 therefore had a bit more latitude in how it approached the first part of the mission.

In the case of MEV-2, the IS-10-02 satellite was in active use in its accustomed orbit, meaning the servicing spacecraft had to coordinate an approach that ran no risk of disrupting the target craft’s operations. Being able to service working satellites, of course, is a major step up from only working with dead ones.

And naturally the goal is to have spacecraft that could dock and refuel another satellite without hanging onto it for a few years, or service a malfunctioning part so that a craft that’s 99% functional can stay in orbit rather than be allowed to burn up. Startups like Orbit Fab aim to build and standardize the parts and ports needed to make this a reality, and Northrop Grumman is planning a robotic servicing mission for its next trick, expected to launch in 2024.

My wild ride with Coupang – TechCrunch