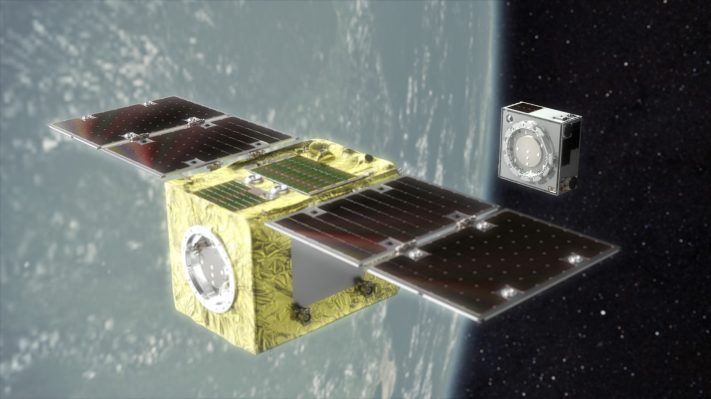 Space startup Astroscale has launched ELSA-d, the demonstration mission for its End-of-Life Services by Astroscale (ELSA) technology, which aims to dock with, and then safely remove, orbital debris. Astroscale’s demonstrator package includes two separate payloads, a servicer that represents its future production spacecraft, and a ‘client’ satellite that’s meant to represent the debris satellites it’ll be de-orbiting on behalf of customers in future.

The Astrocale payload was launched via a Soyuz rocket that took off early this morning from Kazakhstan carrying 38 commercial satellites from 18 countries. It’s the first Astroscale spacecraft to reach orbit, since the startup’s founding in 2013 by Japanese entrepreneur Nobu Okada. Astroscale had launched a micro satellite designed to measure small-scale debris in 2017, but all 18 of the satellites on that particular mission failed to reach orbit, due to human error in the launch vehicle’s programming.

This ELSA-d mission is a much more ambitious effort, and involves what amounts to an active on-orbit demonstration of the technology that Astroscale ultimately hopes to commercialize. The mission profile includes repeat docking and release maneuvers between the servicer satellite and the simulated client satellite, which is equipped with a ferromagnetic plate to assist the servicer with its magnetic docking procedure.

Astroscale hopes to prove out a range of its advertised capabilities with this demonstration, including the servicer’s ability to search out and located the client satellite, inspect it for damage, and then dock with it as mentioned, in both non-tumbling and tumbling scenarios (ie., a payload that’s maintaining a stable orbit, and one that’s spinning end-over-end in space with no ability to control its own attitude).

There’s a lot riding on this mission, which will be controlled from a ground center established by Astroscale in the UK. Aside from its long-term commercial ambitions, the startup is also contracted to partner with JAXA on the Japanese space agency’s first orbital debris removal mission, which aims to be the first in the world to remove a large object from orbit, representing the spent upper stage of a launch rocket.

Ebang Hopes to Capture a ‘Competitive Edge’ After Developing a Next-Generation...