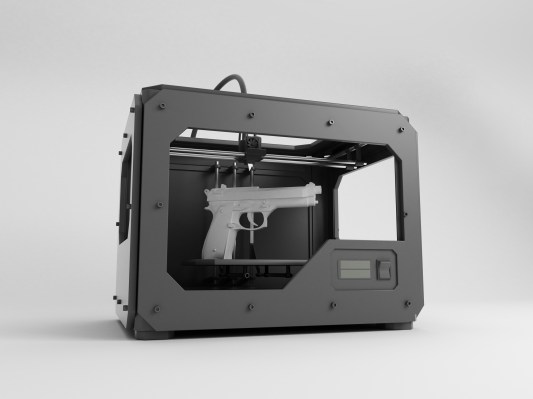 President Biden has announced a new set of initiatives by which he hopes to curb the gun violence he described as “an epidemic” and “an international embarrassment.” Among other things, the ATF will be closing loopholes in unregulated online sales and so-called “ghost guns,” which can be built or printed with no serial numbers or background checks.

Speaking in the White House Rose Garden Thursday afternoon, Biden recounted the many recent mass shootings as horrific tragedies, but pointed out that over a hundred people are shot every day in this country. “This is an epidemic, for God’s sake,” he repeated, “and it has to stop.”

Before outlining his plans for combating the problem, he made sure to address the inevitable Second Amendment objections from people who believe it is a Constitutional right for anyone to own things like assault rifles.

Of course federal laws often conflict with state laws on this point, giving rise to surprising sights like heavily armed protestors taking over the Michigan capitol building — quite legally. But the feds do have a few tricks up their sleeves.

Background checks and registration tracking involve federal authorities, and there are loopholes that have appeared or worsened over recent years as online traffic in guns has increased (social networks are notorious for thinly veiled gun trade) and the process of building weapons at home has become easier.

“I have directed ATF to begin work on an updated study of gun trafficking, one that takes into account the fact that modern guns are not simply cast or forged any more, but can be made of plastic, printed on a 3D printer, or sold in self assembly kits,” said U.S. Attorney General Merrick Garland, who took the podium after Biden. “We will ensure that we understand and measure the problem of criminal gun trafficking in a data driven way.”

“Ghost guns” were a hot topic a few years back when several people and organizations, among them Defense Distributed, attempted to popularize 3D-printed pistols and assault rifle components. The high-tech angle made the media bite, though of course traditional gun trafficking in the form of smuggling and in-person sales dwarf the scale of anything these sites and services delivered.

But gun building kits do represent a significant loophole in the ATF’s regulations, which do not require registration or background checks for them. So a person can get 80% of a gun that way, get the other 20% (usually the “receiver,” which component qualifies the assembly as a firearm) by printing or another method, and have a gun with no serial number or registration whatsoever.

Garland has proposed a rule for the ATF to adopt that would change this and a few other things, such as easily purchased modifications for pistols that effectively make them into short-barreled rifles; the new rule would require those conversion kits to be registered. This presumably will follow the confirmation of the ATF’s first director in five years — the position was vacant for the whole last administration — David Chipmen, whom Biden plans to nominate.

Other efforts by the administration include a $5 billion, 8-year investment in community violence intervention programs, a push for “red flag” laws that temporarily bar people in crisis from obtaining guns, and a nudge for Congress to start working on legislation that addresses things the Executive can’t.