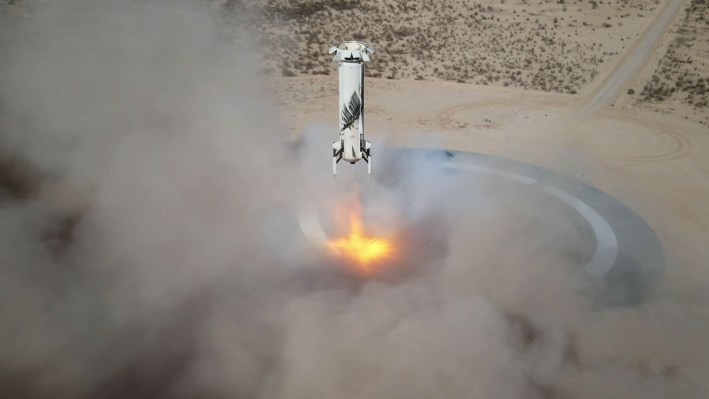 Blue Origin is making progress toward its goal of flying human astronauts aboard its spacecraft, with a plan to run an “astronaut rehearsal” during a launch it has planned for Wednesday, April 14. The launch of Blue Origin’s New Shepard suborbital, reusable rocket will be a key step in verifying the vehicle for paying human passengers.

What does the rehearsal entail? Basically everything except for the actual spaceflight, including boarding and going through preflight operations, the returning to the capsule once it has landed and going through a staged version of an actual capsule exit post-mission. It’s what would happen during a Blue Origin launch with private astronauts on board, with the exception that the Blue Origin personnel standing in for those customers will get out of the capsule before actual engine ignition and launch, and then be transported to the capsule landing site where they’ll get back in and behave as though they’ve been there all along.

There will be one passenger on board the spacecraft during its actual flight: Mannequin Skywalker, a test dummy used by Blue Origin to measure data about what the launch would be like for people. Mannequin has flown previously, but this is the first time it’s playing a sort of human spaceflight relay with the simulation crew doing the ground operations rehearsal portions of the mission.

Blue Origin launched its first New Shepard rocket of 2021 back in January, and that mission included a test of improved capsule cabin crew features, like better acoustics and temperature management system, and new display and communications equipment for the eventual crew. The company expects to begin flying people on board the rocket at some point this year, as of the most recently disclosed timelines.

This week’s launch is set for a take-off time of 8 a.m. CDT (9 a.m. EDT/6 a.m. PDT), and will take place from the company’s launch site in West Texas. A live feed will kick off an hour ahead of the opening of the launch window, and Blue Origin also plans to include footage of the astronaut rehearsal activities, which will be the best look we’ve gotten yet at what its tourist flights might look like.

Bitcoin’s Creator Satoshi Nakamoto Is Now a Member of the Top 20 World’s...

Euler.Tools, a Unique Platform to Explore and Discover Blockchain Tools –...
Scroll to top