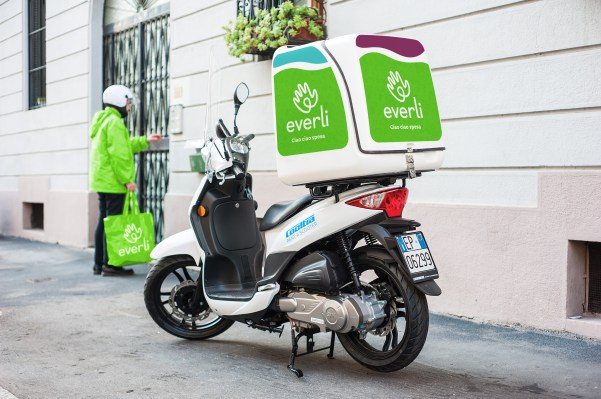 Everli, the European marketplace for online grocery shopping that started in Italy but now also operates in Poland, Czech Republic and France, has raised a $100 million in Series C funding.

The round is led by Verlinvest, with participation from new investors Luxor, DN Capital, C4 Ventures, and Convivialité Ventures. FITEC (part of Fondo Italiano d’Investimento), 360 Capital, Innogest, and DIP also followed on.

Everli, formerly called Supermercato24, says it will use the injection of capital to accelerate growth and further expand its international footprint.

Founded in 2014, Everli lets customers order from local supermarkets for delivery. The company uses gig economy-styled personal shoppers who go into the store and ‘pick’ the products ordered and then deliver them same-day, or for an added cost within an hour. The company charges a delivery fee to consumers, but also generates revenue from fees charged to partnering merchants, and, notably, through advertising.

It has become the delivery partner of some of Europe’s largest grocery brands, offering access to over 300,000 products across the 70 cities it operates in. And, like other online grocery offerings, Everli has benefited from a boost in e-commerce and a reliance on delivery services prompted by the pandemic and country lockdowns.

“Everli is focused specifically on the grocery space,” says Federico Sargenti, CEO at Everli. “Rather than small baskets, or picking up just the basic essentials, Everli is focused on delivering whatever you need right up to your full weekly shop, with same-day delivery and a one-hour delivery window of your choice.”

He says that what further differentiates Everli is its strong relationships with retailers, and the use of their existing infrastructure. “Instead of being tethered and restricted to a radius around our own expensive central warehouses, we are able to operate across a much wider geographical footprint, entering small-to-medium density areas and offering many customers their first opportunity to receive same day groceries, [all] while retaining sustainable unit economics”.

Sargenti describes Everli as more similar to Instacart than many other European delivery firms, including the new crop of dark stores or those that offer groceries as a secondary service to takeouts. “[This is] why we’re leading the grocery space in Europe and securing brands like Lidl, Kaufland, and Carrefour,” adds Sargenti.

In 2020, Everli sales almost quadrupled to $130 million. That growth is happening more and more outside Italy, with its international expansion now responsible for over 20% of orders.

“We are proud to have played a role in helping many people during these difficult times, but we are only getting started, as this industry will never be the same again,” says Sargenti in a statement. “The shift to online delivery is not reversing, and expectations on all sides are only increasing. We have built a model which we believe offers unparalleled value to consumers, through wide access to the retailers and products they love, even in less urban areas, and to retailers, who are now able to affordably compete online and reach a whole new consumer base”.

Adds Simone Sallustio, Executive Director at Verlinvest: “Everli combines its tech & data excellence with the grocery retail experience of its partners and this combination provides it with the perfect position to cement itself as the European e-grocery market leader, delivering the best experience to consumers, value to retail partners, and digital activation to brands”.