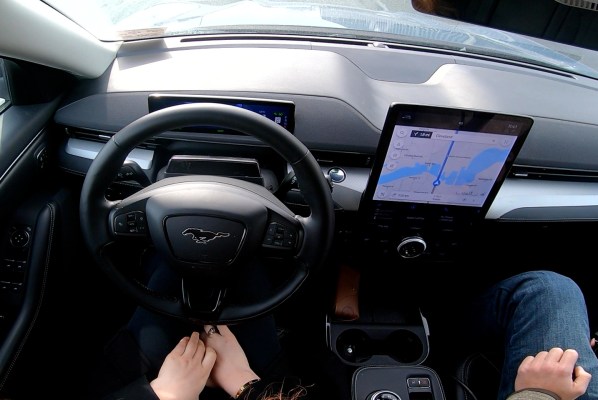 Ford will debut its new hands-free driving feature on the 2021 F-150 pickup truck and certain 2021 Mustang Mach-E models through a software update later this year, technology that the automaker developed to rival similar systems from Tesla and GM.

That hands-free capability — which uses cameras, radar sensors and software to provide a combination of adaptive cruise control, lane centering and speed-sign recognition — has undergone some 500,000 miles of development testing, Ford emphasized in its announcement and tweet from its CEO Jim Farley in a not-so-subtle dig at Tesla’s approach of rolling out beta software to customers. The system also has an in-cabin camera that monitors eye gaze and head position to help ensure the driver’s eyes remain on the road.

The hands-free system will be available on vehicles equipped with Ford’s Co-Pilot360 Technology and will only work on certain sections of divided highways. The system, which will be rolled out via software updates later this year, will initially be available on more than 100,000 miles of highways in North America.

The system does comes with a price. BlueCruise software, which includes a three-year service period, will cost $600. The price of upgrading the hardware will depend on the vehicle. For instance, F-150 owners will have to plunk down another $995 for the hardware, while owners of the “select” Mustang Mach-E model variant will have to pay an additional $2,600. BlueCruise comes standard on CA Route 1, Premium and First Edition variants of the Mustang Mach-E.

While nearly every automaker offers some driver assistance features, Ford is clearly aiming to compete with or capture market share away from GM and Tesla — the two companies with the best-known and capable ADAS. Convincing customers that its system is worth the expense will be critical to meeting its internal target of selling more than 100,000 vehicles equipped with BlueCruise in the first year, based on company sales and take-rate projections.

GM Super Cruise uses a combination of lidar map data, high-precision GPS, cameras and radar sensors, as well as a driver attention system, which monitors the person behind the wheel to ensure they’re paying attention. Unlike Tesla’s Autopilot driver assistance system, users of Super Cruise do not need to have their hands on the wheel. However, their eyes must remain directed straight ahead.

Tesla’s Autopilot feature also combines sensors like cameras and radar, computing power and software. Autopilot, which comes standard in all new Tesla vehicles, will steer, accelerate and brake automatically within its lane. Tesla uses a torque sensor in the steering wheel to determine if drivers are paying attention, although many owners have found and publicly documented hacks so they can keep their hands off the wheels and eyes off the road ahead. Tesla charges $10,000 for its upgrade to FSD (its own internal branding meant to stand for full self-driving). FSD is not an autonomous system. It does provide a number of more capable driver-assist functions, including automatic lane changes, the ability to recognize and act upon traffic lights and stop signs and a navigation feature that will suggest lane changes en route and automatically steer the vehicle toward highway interchanges and exits.

Ford said that its system communicates with drivers in different ways, including displaying text and blue lighting cues in the instrument cluster, which it says is effective even for those with color blindness.

The so-called BlueCruise hands-free technology will be offered in other Ford vehicle models in the future, the company said. Drivers who opt for the technology will continue to receive software updates as it is improved. Ford said future improvements will include a feature that will let the vehicle change lanes by tapping the turn signal indicator as well as one that will predict and then adjust vehicle speed for roundabouts and curves. The company also said it plans to offer regular mapping updates.