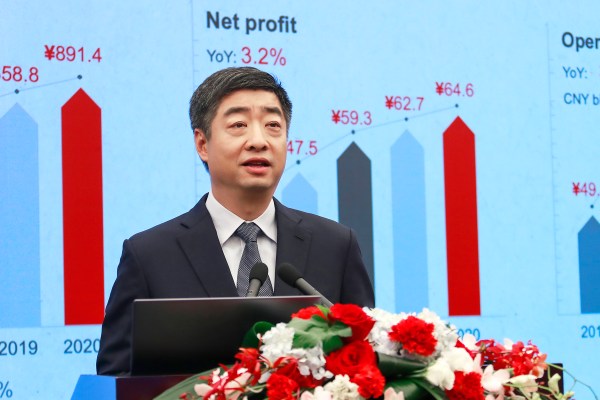 Huawei’s struggles amid U.S.-China trade tensions are driving it to seek opportunities in other smart devices, setting itself up against a raft of hardware makers at home and abroad.

The Chinese tech giant recorded sluggish revenue growth in 2020, climbing just 3.8% to 891.4 billion yuan ($136 billion), as its net profit grew 3.2% to 64.6 billion yuan. The results were in line with Huawei’s forecasts, the company said Wednesday at its annual report day in Shenzhen, a rare occasion to get a glimpse into the private entity’s financials.

The slowdown in 2020 was primarily due to a slump in Huawei’s overseas smartphone sales after U.S. export controls cut the firm off core chipsets and Google services critical to consumers. But the challenge has also sped up the firm’s pace to diversify and offset losses from its phone business.

For the past two years, Huawei’s has been ratcheting up efforts in a multitude of smart devices, including AR/VR headsets, tablets, laptops, TVs, smartwatches, speakers, headphones and in-car systems.

Huawei’s foray into the automotive industry has in particular attracted much limelight as the global smart vehicle industry booms. Reuters reported recently that Huawei would be producing its own branded cars, which the company denied. At today’s event, the firm’s rotating chairman Ken Hu reiterated that Huawei would play to its own strengths and only be supplying certain car components and services, such as the in-car operating system and smart cockpit.

Huawei’s matrix of connected products is reminiscent of Xiaomi’s IoT strategy built around its smartphones and operating system, with the difference being that Huawei is also a telecom infrastructure supplier.

Despite moves by a few countries, such as the United Kingdom, to exclude Huawei from their 5G rollout plans, Huawei’s carrier segment in 2020 generated revenues on par with the year prior. The COVID-19 pandemic was a boon to the bsuiness, Hu said, which saw global demand in network solutions rise as people worked and learned from home.

Huawei’s IoT push has shown some early traction but competition is fierce. Smartwatches, it said, was one of its major revenue drivers from last year.

Globally, Apple held onto its leading position in wearables with 34.1% of the market in 2020, according to research firm IDC. Huawei ranked third at 9.8%, trailing its domestic rival Xiaomi which accounted for 11.4% of total shipments last year.

Overall, Huawei was leaning heavily on its home market to sustain growth in 2020. China accounted for 65.5% of its total revenues, growing by 15.4% year-over-year. Meanwhile, revenues fell 12.2% in Europe, the Middle East and Africa, was down 8.7% in the rest of Asia and down 24.5% in the Americas.