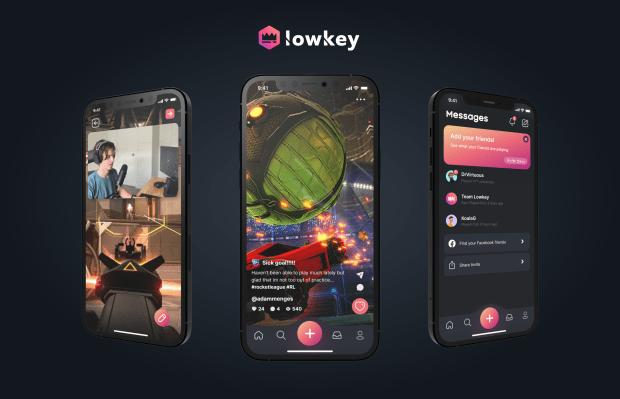 While the growth of game-streaming audiences have continued on desktop platforms, the streaming space has felt surprisingly stagnant at times, particularly due to the missing mobile element and a lack of startup competitors.

Lowkey, a gaming startup that builds software for game streamers, is aiming to build out opportunities in bit-sized clips on mobile. The startup wants to be a hub for both creating and viewing short gaming clips but also sees a big opportunity in helping streamers cut down their existing content for distribution on platforms like Instagram and TikTok where short-form gaming content sees a good deal of engagement.

The startup announced today that they’ve closed a $7 million Series A led by Andreessen Horowitz with participation from a host of angel investors including Figma’s Dylan Field, Loom’s Joe Thomas and Plaid’s Zach Perret and William Hockey.

We last covered Lowkey in early 2020 when the company was looking to build out a games tournament platform for adults. At the time, the company had already pivoted after going through YC as Camelot, which allowed audiences on Twitch and YouTube to pay creators to take on challenges. This latest shift brings Lowkey back to the streaming world but more focused on becoming a tool for streamers and a mobile hub for viewers.

Twitch and YouTube Gaming have proven to be pretty uninterested in short-form content, favoring the opportunities of long-form streams that allow creators to press broadcast and upload lengthy streams. Lowkey users can easily upload footage captured from Lowkey’s desktop app or directly import a linked stream. This allows content creators to upload and comment on their own footage or remix and respond to another streamer’s content.

One of the challenges for streamers has been adapting widescreen content for a vertical video form factor, but CEO Jesse Zhang says that it’s not really a problem with most modern games. “Games inherently want to focus you attention on the center of the screen,” Zhang tells TechCrunch. “So, almost all clips extend really cleanly to like a mobile format, which is what we’ve done.”

Lowkey’s desktop app is available on Windows and their new mobile app is now live for iOS.

PARSIQ’s IQ Protocol Launches, Powering the Tokenized-SaaS Ecosystem of the...

Sarah Kunst will outline how to get ready to fundraise at Early Stage – T...
Scroll to top