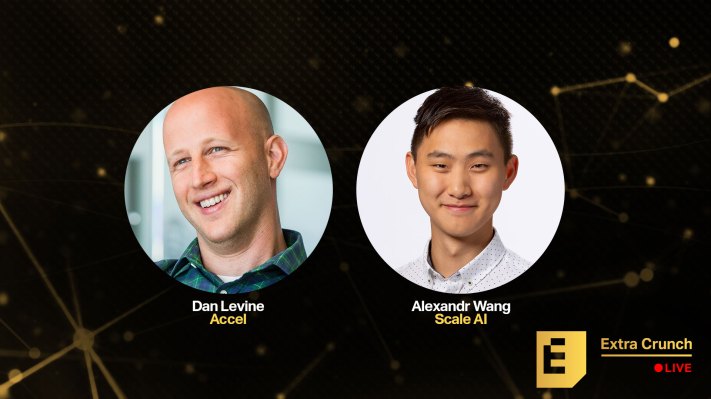 Few companies have done better than Scale at spotting a need in the AI gold rush early on and filling that gap. The startup rightly identified that one of the tasks most important to building effective AI at scale — the laborious exercise of tagging data sets to make them usable in properly training new AI agents — was one that companies focused on that area of tech would also be most willing to outsource. CEO and co-founder Alex Wang credits their success since founding, which includes raising over $277 million and achieving break-even status in terms of revenue, to early support from investors including Accel’s Dan Levine.

Accel haș participated in four of Scale’s financing rounds, which is all of them unless you include the funding from YC the company secured as part of a cohort in 2016. In fact, Levine wrote one of the company’s very first checks. So on this past week’s episode of Extra Crunch Live, we spoke with Levine and Wang about how that first deal came together, and what their working relationship has been like in the years since.

Scale’s story starts with a pivot, and with a bit of rule-breaking, too — Wang went off the typical YC book by speaking to investors prior to demo day when Levine cold-emailed him after seeing Scale on Product Hunt. The Product Hunt spot wasn’t planned, either — Wang was as surprised to see his company there as anyone else. But Levine saw the kernel of something with huge potential, and despite being a relative unknown in VC at the time, didn’t want to let the opportunity pass him, or Wang, by.

Both Wang and Levine were also able to provide some great feedback on decks submitted to our regular Pitch Deck Teardown segment, despite the fact that Levine actually never saw a pitch deck from Wang before investing (more on that later). If you’d like your pitch deck reviewed by experienced founders and investors on a future episode, you can submit your deck here.

Knowing when to bend the rules

As mentioned, Levine and Accel’s initial investment in Scale came from a cold email sent after the company appeared on Product Hunt. Wang said the team had just put out an early version of Scale, and then noticed that it was up on Product Hunt — it was submitted by someone else. The community response was encouraging, and it also led to Levine reaching out via email.

“One of the side effects of that, one of the outcomes, was that we got this cold email from Dan,” he said. “We really knew nothing about Dan until his cold email. So like many great stories that started with a bold, cold email. And we were pretty stressed about it at the time, because in YC, they tell you pretty definitively, ‘Hey, don’t talk to a VC during the batch,’ and we were squarely in the middle of the batch.”

Wang and the team were so nervous that they even considered “ghosting” Dan despite his obvious interest and the prestige of Accel as an investment firm. In the end, they decided to “go rogue” and respond, which led to a meeting at the Accel offices in Palo Alto.