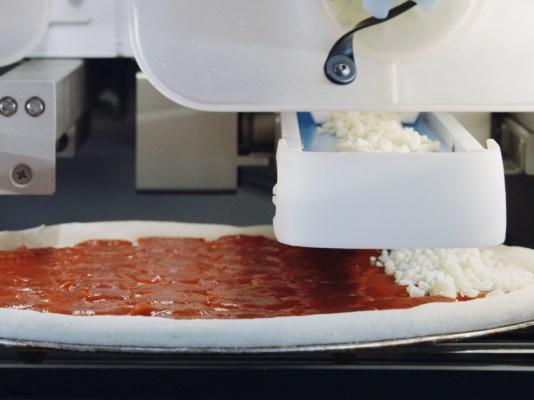 So, true story. Over the weekend I was talking to someone about restaurant robotics. It’s a concept people often have trouble visualizing — and understandably so. Among other things, there’s really no commonly accepted form factor in a category that sometimes is literally a robot arm flipping hamburgers.

My short response was, “they’re large kiosks that make pizza.” And honestly, that’s not really far from the truth. These sorts of self-contained assembly line robots are probably about as close as we have to a consensus design in the category — and for good reason. They’re designed to operate with minimal interaction — largely the employee’s involvement is limited to order input, restocking ingredients and cleaning.

The pizza part is two-fold. First: people like pizza. It’s plentiful and popular, so it makes sense that it would be one of the first foodstuffs you’d want to automate. Second: it’s relatively easy to automate. The process for making it is consistent and the constraints are clear. It’s something that can be broken down into an easy to follow, step by step set of instructions.

I covered two restaurant robots in the past week. It’s a category that saw a pretty sizable boost in interest during the pandemic, as restaurants were short-staffed essential services looking for ways to minimize human contact with food as the scientific world was scrambling to determine how the novel coronavirus is spread.

Picnic very much fits in with the aforementioned description. It is, quite literally, a big, pizza-making box. This week the Seattle-based company announced a $16.3 million raise that includes a $3 million bridge filed last fall. It’s targeting restaurants, as well as public gathering spaces (remember those?) like schools, stadiums and hospitals. There are a handful of companies in the category, including XRobotics — though the formerly best known, Zume, bailed out of the pizza robot space a while back.

Chef Robotics announced a $7.7 million raise this week. I can’t really tell you what the final robot looks like yet, because that’s still trade secret stuff. Here’s what the company says:

Chef is designed to mimic the flexibility of humans, allowing customers to handle thousands of different kinds of food using minimal hardware changes. Chef does this using artificial intelligence that can learn how to handle more and more ingredients over time and that also improves. This allows customers to do things like change their menu often. Additionally, Chef’s modular architecture allows customers to quickly scale up just as they would by hiring more staff (but unlike humans, Chef always shows up on time and doesn’t need breaks).

Not a lot to go off there, but the modularity bit is interesting — and something a lot of these companies are exploring. If you can get a robot to automate a simple, repetitive task, you can potentially offer swappable hardware that can apply the technology to different kinds of food.

Other notable raises for the week include Mech-Mind robots. The Beijing-based company announced a Series C. It hasn’t revealed a specific figure, but given that it says the raise brings its total funding to over $100 million and it had previously raised a total of $79 million (including a $15 million Series B last year), you can extrapolate from there.

Mech-Mind is an industrial robotics and AI company focused on various manufacturing tasks.

Credit demand from Americans fell during the pandemic — except in one major...