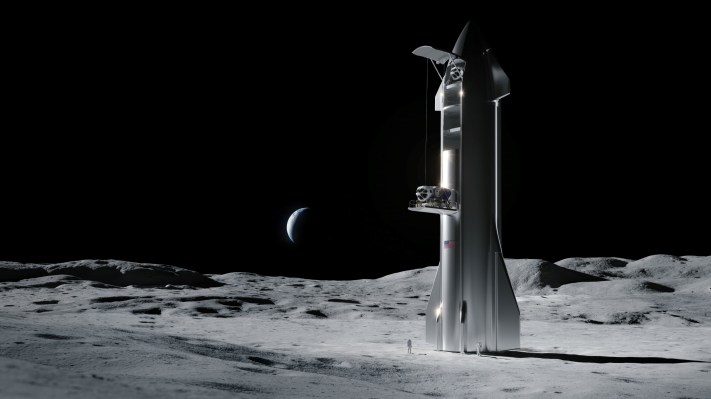 The winner of NASA’s Human Landing System (HLS) contract award is SpaceX, which bid $2.9 billion for the privilege of developing the means by which NASA astronauts will return to the lunar surface for the first time since the Apollo program. SpaceX was in the running alongside Blue Origin and Dynetics, but reportedly undercut both those prospective suppliers considerably with its bid, according to The Washington Post.

SpaceX proposed using its Starship spacecraft, currently under development, as the landing vehicle for astronauts once they arrive at their lunar destination. The HLS is a key part of NASA’s Artemis program, which will begin with uncrewed flights, followed by a moon flyby with a human crew, and eventually a human lunar landing at the south pole of the moon, during a mission which had been targeting 2024 as its fly date.

NASA announced that SpaceX, Blue Origin and Dynetics made up the entirety of its field of approved vendors for bidding on the HLS contracts back in April last year. Since then, both Blue Origin (which bid alongside a “national team” that included Lockheed Martin, Northrop Grumman and Draper) and Dynetics have built full-scale models of their system and submitted proposals detailing their plans for the functional versions to NASA for consideration. Meanwhile, SpaceX has been actively testing functional prototypes of its Starship spacecraft in Texas and is also in the process of developing the Super Heavy booster that will propel it to the moon once it’s ready.

The plan here was for NASA to have chosen all three companies to build out initial versions in order to satisfy the early requirements of the contract, and then ultimately, it was generally thought that the agency would select a couple from the list of three to build human landers, in order to provide it with some flexibility when it comes to means of getting to the lunar surface. That’s essentially how NASA operated with its Commercial Crew program for the International Space Station, which saw awards for both SpaceX and Boeing to build astronaut transport spacecraft. SpaceX has already qualified and begun to operate its vehicle, and Boeing hopes to bring its option online either late this year or early next.

SpaceX has won a lot of trust at NASA by delivering on the Commercial Crew program with a reliable, reusable human-rated spacecraft in the Crew Dragon. The Post also says that in addition to its attractive pricing, NASA wasn’t drawn to Starship’s flexibility and cargo capacity since it’s aiming to be able to fly not just humans, but also large quantities of supplies and materials to the moon, and eventually, beyond.

Starship is a long way off from that goal at the moment, however; SpaceX has been quickly developing new iterations in a rapid prototyping approach to its test phase, but the most recent Starship high-altitude flight ended poorly with an explosion prior to landing. Other elements of the test program, however, including showing that Starship can successfully reorient itself in midair and slow its decent for landing, have been more successful on past tests. None of the tests so far have left Earth’s atmosphere, however, nor have they involved any human flight testing, both of which will require a lot more development before the spacecraft is deemed mission-ready.

SpaceX was also the launch provider chosen to deliver components of the Lunar Gateway satellite in 2024, working with Maxar, which will produce the actual Power and Propulsion Element and Habitation and Logistics Outpost. These, however, will be delivered via Falcon Heavy, which has already had multiple successful launches.