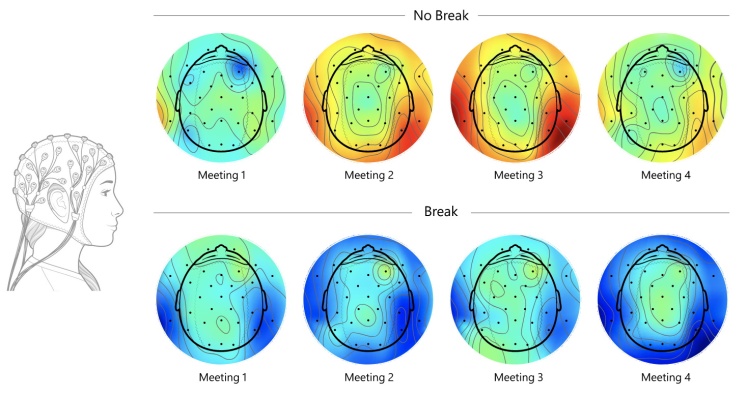 We all know these constant video calls are doing something to our brains. How else could we get tired and frazzled from sitting around in your own home all day? Well, now Microsoft has done a little brain science and found out that yeah, constant video calls do increase your stress and brain noise. Tell your boss!

The study had 14 people participate in eight half-hour video calls, divided into four a day — one day with ten-minute breaks between, and the other all in one block. The participants wore EEG caps: brain-monitoring gear that gives a general idea of types of activity in the old grey matter.

What they found is not particularly surprising, since we all have lived it for the last year (or more for already remote workers), but still important to show in testing. During the meeting block with no breaks, people showed higher levels of beta waves, which are associated with stress, anxiety, and concentration. There were higher peaks and a higher average stress level, plus it increased slowly as time went on.

Taking ten-minute breaks kept stress readings lower on average and prevented them from rising. And they increased other measurements of positive engagement.

It’s certainly validating even if it seems obvious. And while EEG readings aren’t the most exact measurement of stress, they’re fairly reliable and better than a retrospective self-evaluation along the lines of “How stressed were you after the second meeting on a scale of 1-5?” And of course it wouldn’t be safe to take your laptop into an MRI machine. So while this evidence is helpful, we should be careful not to exaggerate it, or forget that the stress takes place in a complex and sometimes inequitable work environment.

For instance: A recent study published by Stanford shows that “Zoom Fatigue,” as they call it (a mixed blessing for Zoom), is disproportionately suffered by women. More than twice as many women as men reported serious post-call exhaustion — perhaps because women’s meetings tend to run longer and they are less likely to take breaks between them. Add to that the increased focus on women’s appearance and it’s clear this is not a simple “no one likes video calls” situation.

Microsoft, naturally, has tech solutions to the problems in its Teams product, such as adding buffer time to make sure meetings don’t run right into each other, or the slightly weird “together mode” that puts everyone’s heads in a sort of lecture hall (the idea being it feels more natural).

Stanford has a few recommendations, such as giving yourself permission to do audio only for a while each day, position the camera far away and pace around (make sure you’re dressed), or just turn off the self-view.

Ultimately the solutions can’t be entirely individual, though — they need to be structural, and though we may be leaving the year of virtual meetings behind, there can be no doubt there will be more of them going forward. So employers and organizers need to be cognizant of these risks and create policies that mitigate them — don’t just add to employee responsibilities. If anyone asks, tell them science said so.