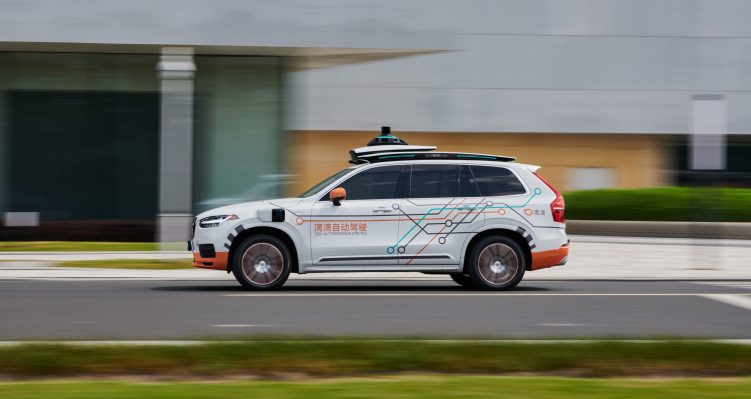 As the autonomous driving race in China heats up, Didi is rushing to expand its car fleets by picking Swedish automaker Volvo, an old partner of Uber, as its ally.

Didi said on Monday it will be using the XC90 SUVs of Volvo, which has been owned by Chinese auto company Geely since 2010, for its network of robotaxis in the long term. Didi created a subsidiary dedicated to autonomous driving last year and the unit has since raised about $800 million from investors including SoftBank Vision Fund and IDG Capital. The subsidiary now has over 500 employees.

Didi started out as a ride-share app in 2012 and gobbled up Uber China in 2016. It now offers a range of mobility services including taxi hailing, ride-hailing, carpooling, shared bikes and scooters, as well as financial services for drivers. The company is seeking a valution north of $100 billion in an initial public offering, Reuters reported last month.

Didi’s autonomous driving arm has been testing robotaxis for the past two years in China and the United States, but Volvo’s XC90 model will be the first to adopt Didi’s freshly minted self-driving hardware system called Gemini, which contains sensors like short, mid and long-range lidars, radars, cameras, a thermal imager; a fallback system; and remote assistance through 5G networks.

Didi said that its Gemini platform, coupled with Volvo’s backup functions including steering, braking and electric power, will eventually allow its robotaxis to remove safety drivers. If any of the primary systems fails during a ride, Volvo’s backup systems can act to bring the vehicle to a safe stop.

Didi is competing against a clutch of well-funded robotaxi startups in China, such as Pony.ai and WeRide, which are busy tesing in major Chinese cities and California while splurging on R&D expenses to reach Level 4 driving. AutoX, another Chinese robotaxi company, announced last week that it will be using Honda’s Accord and Inspire sedans for its test drives in China. The edge of Didi, some suggest, is the mountains of driving data accumulated from its ride-hailing business spanning Asia, Latin America, Africa and Russia.

Rising electric automakers like Nio and Xpeng have also joined in the race to automate vehicles, making bold claims that they, too, will be able to remove safety drivers soon. Meanwhile, traditional car manufacturers don’t want to fall behind. BAIC, a state-owned enterprise, for instance, is adding Huawei’s advanced automation system and smart cockpit to its new electric passenger cars.

Dogecoin Is Bullish and Up 28% Despite Crypto Market’s Weekend Flash ...

Bank of America Investigation: 74% of Fund Managers Understand BTC as a Bub...
Scroll to top